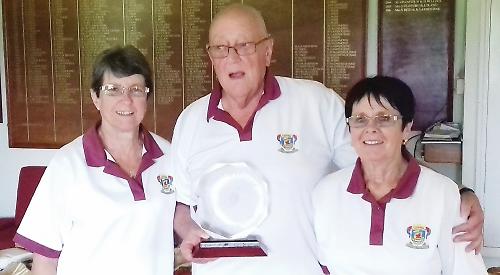 Each team played four matches of five ends which were spread over five rounds with the two best performing teams going through to the final.

The first team through on points was the triple made up of David Lloyd, Elaine Robinson and Mark Belcher, winning all four of their qualifying matches.

The second finalists consisted of Wendy Buss, David Steel and Margaret Bullock having won three of their four matches, just pipping the team of Clare Gutteridge, Jackie Stafford and Francis Benham, who had also won three matches, by virtue of winning just one more end over the four matches.

The final itself was to be played over four ends, with a fifth end if teams were found to be level.

The team skipped by Belcher won the first end with a single shot and they were holding shots on the second until Bullock came in well to draw the shot with her last wood. This levelled things up 1-1 and, with Buss now in control of the mat and the jack, gave Bullock’s team the momentum and initiative enabling them to take three shots on the third end.

The fourth end saw a similar scenario with Bullock holding three shots on a long jack and despite Belcher’s best efforts he could not affect the final outcome on this occasion with Bullock’s side taking the honours 7-1.

SHIPLAKE eased to a comfortable 111-59 Oddfellows Triples League victory against visiting side HURST. The home side secured all 14 points from the match.

Daphne Jacob’s triples were drawing at 10-10 before they pulled away to win 20-10 while Matt Shepherd’s rink was nip and tuck over the early stages with the lead changing hands before Shiplake ran out 27-15 winners..

The final rink, skipped by Graham Kennedy, saw Shiplake lead from start to finish as they ran out 20-8 winners.

SHIPLAKE LADIES returned to winning ways last week as they defeated WOKINGHAM 76-41, winning on two of the three triples played.

Sylvia Blackmore’s triple always had the upper hand, leading 13-1 after seven ends and kept the pressure on to win 28-6.

Daphne Jacob’s triple were also off to a flying start scoring a six on the second end and an eight on the fourth end. They maintained their dominance throughout and were the highest winning rink, finishing 35-12.

Wokingham won a hard fought game on the next rink with a surge of shots in the latter half, beating Wendy Cross’s triple 23-13.

On Sunday GORING HEATH triumphed by one point in their friendly match with PALMER PARK.

Maureen Jones’s Goring Heath team on rink two built an early lead, but Palmer Park started to reel them in before Jones’ team hung on for a 22-17 win.

Ian Gair’s Goring Heath team on rink three were behind initially, but eventually got their eye in, with good shots from all four team members, to build up a comfortable lead. Again, Palmer Park responded but, helped by a good four-shot end, Gair’s team stayed ahead for a 20-12 win.

With rinks two and three finished, on rink one Palmer Park led 26-11 after 20 ends, and held the overall lead by two points. On the last end Clive Goodbourn’s Goring Heath team lay three to lose the rink 26-14, but win the match overall 56-55.