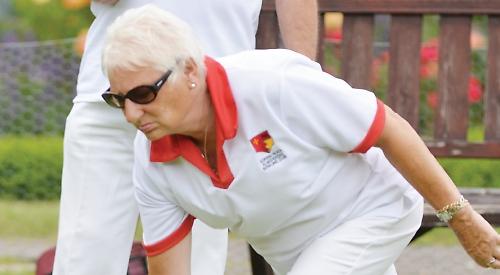 HENLEY continued their good form as they ran out 94-74 winners at home to UNIVERSITY OF READING in their Oddfellows Triples League match on Wednesday of last week. The win gave Henley 10 legaue points.

Roger Sayer’s triple with Sally Daniells and David Maybury went down narrowly 15-17, as did Barrie Davies’ triple with Maurice Robins and Jeanie Davies 12-18.

On Saturday HENLEY and WATLINGTON both secured six points from their Plomer Cup clash.

Home side Henley won three of the triples played albeit each one by a modest margin whilst the visitors won two of the triples by greater margins to win 92-70.

Colin Ward’s triple of Peter Borsberry and Angelika Crisa were unable to maintain their recent good form and went down 7-25 while David Burdon’s triple of Sally Daniells and John Cross were edged out 11-19.

Last Sunday GORING HEATH hosted BURGHFIELD in a three-rink triples friendly, winning overall by 67 shots to 32, and on two of the three rinks.

On rink one Clive Goodbourn’s Goring Heath team led from start to finish to win 28-4. On rink two after 11 ends, Burghfield were still in touch at 11-7 down, but thereafter were stuck on seven so that Daphne Walker’s Goring Heath team ran out victors at 21-7.

Rink three was the closest match, with Burghfield building what looked like an unassailable 16-7 lead but on the next four ends Ian Gair’s Goring Heath team scored 11 points to lead 18-16. On the last two ends Burghfield added a two and a three to win 21-18.

On Wednesday last week, WATLINGTON hosted GORING HEATH in a five-rink triples match in the Plomer Cup, triumphing on all five rinks and overall on points 128-51. The most emphatic victory went to Ade Kemish’s Watlington team at 25-4, while Maureen Jones’s Goring Heath team came closest, piling on seven points in the last three ends to lose 20-22.

The match was reduced to just four triples from the usual six due to a shortage of Shiplake players available to play and one triple was also reduced to a pair on the day due to the visitors being a further player short.

On the first rink skipped by Dave Webb Shiplake got off to a slow start before running out 18-14 winners while Jim Bland, playing the pairs match with Jean Webb, drew 17-17.

Melvin Stafford’s rink ran out 18-12 winners while the only losing rink for the visitors saw Matt Shepherd’s trio go down 19-12.

SHIPLAKE eased to a comfortable 146-67 win at home to CIPPENHAM on Saturday in a six triples friendly where the hosts won on five of the rinks.

David Bullock’s triple cruised to a 31-9 win while Mike Lovejoy’s trio also led from start to finish to win 24-6.

Graham Kennedy’s rink went six shots down after two ends and were always playing catch up from then on. A strong second half for the visitors, who were a man short, saw them comfortably home and winning despite the adjustment.

Matt Shepherd’s four were five down at the halfway mark, and although they fought to get back in the game, it was a little too late.

Skip Jim Bland’s four had a splendid evening, leading by 12 at the midway point and allowing their opponents just the odd single in the second period, romping home with a 19 shot victory.

An even better performance from, captain of the day, Barry Lambourne’s rink saw them dominate their opponents from start to finish, and nail the points with a 23-shot margin.

SHIPLAKE moved to the top of the Oddfellows Triples League after beating PANGBOURNE by 109 shots to 32 at Memorial Avenue on Wednesday of last week.

The match was reduced to three rinks as Pangbourne could not raise a full side.

On the first rink skipped by Graham Kennedy, Shiplake eased to a 29-16 win while Jim Bland guided his side to a 22-11 win. Wendy Cross’s trio also won comfortably, 28-5.

SHIPLAKE ran out 86-58 winners away at WOKINGHAM in a five-rink friendly match where the visitors triumphed on three rinks.

On the first rink skipped by Matt Shepherd, Shiplake pulled away after being held 6-6 to win 17-11. Dave Bullock’s rink led from start to finish to win 22-6 while Jim Bland’s triple won 22-10.