Shiplake tighten their grip at top of Oddfellows League 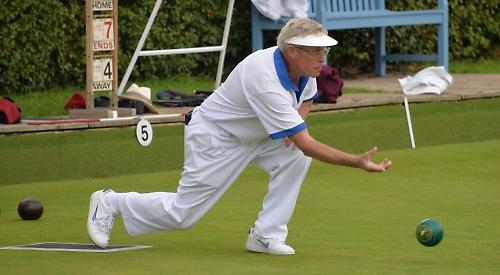 HENLEY triumphed by 112 shots to 91 in their home six mixed rink friendly clash with THE ROYAL HOUSEHOLD on Saturday where rain forced the match to 18 ends.

Both Colin Ward and Peter Borsberry’s rinks won by one shot on their final ends. Borsberry with Angelika Crisa, John Rees and Theresa Dombey were evenly matched after 12 ends at 13-13, but after 17 ends they were trailing by three shots. With seven bowls having been delivered on the final end Henley were one shot down with Borsberry to bowl the final bowl where he scored four shots resulting in a 19-18 win. Ward with Rosie Maybury, Jim Woodford and Maurice Robins were leading 18-11, but dropped seven shots on the next four ends for the scores to be level. Henley managed to score one on the final end to win 19-18.

Frank Powell with Trish Jones, Brian Duddy and Di Woodford were only one down after 10 ends but only managed two shots over the next eight ends to go down 17-11.

Richard Kingston with Jeanie Davies, Nigel Bridges and Peter Watkins struggled throughout the afternoon to go down 22-11.

On Sunday HENLEY ran out 80-66 winners at home to FARLEY HILL in a four triples mixed friendly in wich each club won on two rinks but the margins of the hosts’ wins were greater.

Barrie Davies’s rink with Len Snelgrove and Di Woodford had a closely contested game for the first nine ends being level 9-9 but then pulled away to a significant lead eventually winning 26-13. Rod Grant, playing as skip for the first time, with Theresa Dombey and Peter Borsberry gained an early advantage of six shots after only five ends and maintained this advantage to run out 24-14 winners.

Joan Edwards with Kevin Browne and David Silvester retrieved a sluggish start and were level after the seventeenth end but went down by just one a shot on the final end, 15-14. Jeanie Davies’s rink with John Cross and Keith Lawrance were 13-9 ahead after 12 ends but then conceded 12 shots on the next two ends eventually losing 24-16.

GORING HEATH ran out 85-80 winners at HENLEY on Wednesday of last week in the Plomer Cup match of five triples where the visitors won on three rinks to gain eight league points to the hosts’ four.

On rink one Goring Heath’s Sally Bergmann, Derek Creasey and Ralph Gault appeared to be cruising to vistory at 20-9 after 15 ends, but a late surge by Henley brought the final score to 20-16.

On rink two Goring Heath’s Eileen Hunt, Ken Wright and Clive Goodbourn were 10-8 up after 10 ends, but then Henley piled on the shots to win 23-14. Rink three went Henley’s way from start to finish, ending up 20-10 in the hosts’ favour.

On rink four Goring Heath’s Geoff Williams, Chris Bergmann and Maureen Jones were 15-6 up after eight ends before Henley won five ends in a row to get within two shots. After that, honours were more or less even to give Goring Heath the 18-15 win. Rink five was Goring Heath’s most emphatic victory, Felicity Abbot, Gareth Jones and Ian Gair triumphing 23-6.

The previous weekend GORING HEATH went on tour to Eastbourne. At SEAFORD the visitors won two out of five rinks and overall 73-69. The following day the tourists had less success against EASTBOURNE, winning only one of the six rinks and losing overall 95-74.

Oddfellows Triples League leaders SHIPLAKE ran out 89-66 winners at home to UNIVERSITY OF READING on Sunday to secure 10 league points to the visitors’ four.

Daphne Jacob’s rink ran out 19-10 winners while Wendy Cross guided her trio to a 10-16 victory. Graham Kennedy’s rink eased to a comfortable 27-7 win while Jim Bland’s rink came from 11-6 down to narrowly win 20-19. Barrie Davies’s rink saw the only defeat of the day for Shiplake as they went down 14-13.

SHIPLAKE maintained their push for the Oddfellows Triples League title with a convincing 98-43 win away at struggling PANGBOURNE on Wednesday of last week.

The match was reduced to four triples as the hosts had a shortage of players, meaning Pangbourne forfeited 15 shots. Shiplake picked up 12 league points to Pangbourne’s two.

Jim Bland’s triple got off to a good start as they led 6-2 but the hosts hit back to an 8-7 lead and from there on had the upper hand as they narrowly won 17-16.

Graham Kennedy’s rink came from 4-2 down to thrash the hosts 29-6 while Barrie Evans’s rink saw the lead change hands several times before the Shiplake four won 12-11. On the final rink David Bullock’s side led from start to finish as they ran out 26-9 winners.

SHIPLAKE won on four of the five triples rinks played at TWYFORD on Saturday to win the friendly match by 97 shots to 66.

The first rink skipped by Melvin Stafford was a close affair up until the half-way stage where the visitors narrowly led 12-11. However, from here on Shiplake took control and won 21-12. The only losing rink of the day was that skipped by Jim Bland who saw his side lose 17-10.