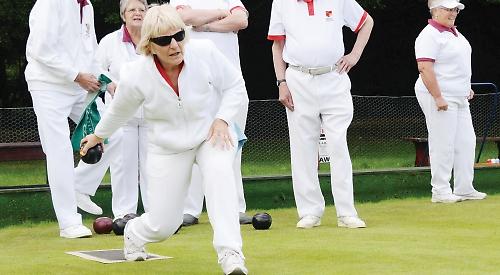 HENLEY lost out in the re-arranged Oddfellows Triples League clash at PALMER PARK on Friday of last week where they went down 92 shots to 78 despite winning on three of the five rinks played. The hosts secured eight league points from the match while Henley picked up six.

Colin Ward with David Silvester and Angelika Crisa were ahead from the start of their match and ran out 21-9 winners. Barrie Davies with Di Woodford and David Maybury were similarly ahead from the start and won 22-12 while Gill Robins with Norman Daniells and Andy Scott had a close encounter. They were level 15-15 after 17 ends and managed to score one on the final end to win 16-15.

Peter Borsberry with Maurice Robins and Rosie Maybury went down 31-12 while Richard Kingston with Peter Watkins and Jeanie Davies lost 25-7.

Richard Kingston with Di Woodford and David Maybury were one down after 17 ends but managed to pick up two shots on the last end to win 15-14.

David Burdon with Peter Borsberry and Rosie Maybury raced to a 10-3 lead after five ends and ran out 26-16 winners while Gill Robins with Andy Scott and Jennie Wingrove returned the highest winning rink, 22-10, having raced to a 17-shot lead after 12 ends.

Colin Ward with Maurice Robins and Angelika Crisa were leading 14-13 after 16 ends, dropped three on the next end but could only manage a two on the final end to go down narrowly 16-15 while Barrie Davies with Jim Woodford and Jeanie Davies were level 7-7 after nine ends only to go down eventually 22-14.

On Sunday HENLEY lost out at CAVERSHAM in a mixed triples Plomer Cup match. The visitors won on two rinks as they went down 101-83 to secure four points to Caversham’s eight. Richard Kingston with Peter Watkins and Jeanie Davies won 20-17, Gill Robins with Andy Scott and David Maybury won 20-14, Colin Ward with Maurice Robins and Rosie Maybury went down narrowly 19-21, Peter Borsberry with Angelika Crisa and John Cross 12-28, and Barrie Davies with John Rees and Lynn Sayer 12-21.

SHIPLAKE ran out 71-57 winners in their Plomer Cup tie at GORING HEATH last Saturday as the visitors won two rinks to one and nine league points to the hosts’ three.

On rink one Shiplake were 10-0 up after four ends, but then the hosts, under Clive Goodbourn, put in a two, a three, a four and a one to draw level after eight ends. After that, Shiplake edged ahead, maintaining a lead of one to four points up to a final result of 21-19.

On the second rink skip Daphne Walker faced her second sudden-death last end in two matches but, having lost by one point the previous week, she won by three this week. Again, Shiplake built an early lead and were 18-10 up after 15 ends, but the hosts scored six on end 16 and levelled at 20-20 after 20 ends. On a sudden-death last end Goring Heath triumphed to win the rink 23-20.

Rink three went Shiplake’s way from start to finish. They were 30-8 up after 16 ends before Ralph Gault’s Goring Heath team won the last five ends to salvage a little pride as they lost 30-15.

SHIPLAKE made it two Plomer Cup wins in two days as they triumphed 144-84 at DIDCOT on Sunday where they won on four of the five rinks to claim 10 points to the hosts’ two.

Shiplake were boosted by some additional experienced players who came in at late notice to cover an earlier shortfall in names.

On the first rink skipped by Dave Webb Shiplake went 3-1 up before losing their way as the hosts ran out comfortable 29-9 winners. Mike Shepherd’s rink saw the advantage change hands several times with the visitors being 11-4 up, 20-14 down before narrowly winning 22-20.

Daphne Jacobs’ rink eased to a 36-17 win while Barry Lambourne’s four won 36-12. The final rink, skipped by Wendy Cross, saw the highest win of the day as the visitors won 41-6.

A depleted SHIPLAKE side went down to a 49.5-87 defeat at WITNEY TOWN on Thursday of last week in Division 2 of the Oxfordshire League. The hosts secured five league points to Shiplake’s one.

The Shiplake triple skipped by Francis Benham took an early lead, but could not sustain it, and the second period was emphatically won by the home side who went on to win by 25 shots.

The triple skipped by Tony Reid also took an early lead but similarly were well beaten in the second half and went down by 12 shots.

Barrie Evans’s triple struggled for length on a poor rink in the first half, but a few good scores brought them back into the game, before they lost in the end by four shots.

For the second week running, the only good result for Shiplake came from the rink of Jim Bland who won comfortably by 12 shots, giving Shiplake a welcome point.