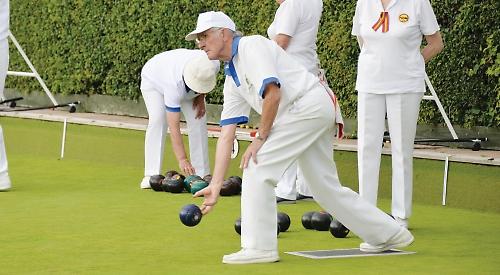 HENLEY had mixed fortunes in the last week where they played four Oddfellows Triples League matches, picking up two wins and two defeats.

On Wednesday of last week HENLEY visited READING UNIVERSITY, where they won on two of the five rinks but by significantly greater margins than on the three rinks lost, with the result being a win for the visitors by 92 shots to 79. Henley picked up eight league points to the hosts’ six.

Gill Robins’ triple with Andy Scott and David Maybury led the way winning 33-15 supported by Norman Daniells’ triple with Jeanie Davies and Barrie Davies 20-10. Rod Grant’s triple with Angelika Crisa and Peter Borsberry went down by one shot which they conceded on the final end. Richard Kingston’s triple with John Rees and Joan Edwards 12-18 while Colin Ward’s triple with Rosie Maybury and Maurice Robins lost 14-22.

Last Friday HENLEY lost 93-67 at home to PALMER PARK where the visitors secured 11 league points to the hosts’ three.

Palmer Park won three of the five rinks, one rink was drawn and one lost. Barrie Davies’ triple with Jeanie Davies and Rod Grant flew the flag for Henley wining 22-13 and Colin Ward’s triple with Angelika Crisa and Dave Silvester secured a well-earned point by halving their match. Gill Robins’ triple with Andy Scott and Norman Daniells trailed from the outset losing 24-9, as did David Burdon’s triple with Brian Duddy and Di Woodford losing 23-11 whilst Richard Kingston’s triple with Theresa Dombey and Peter Borsberry was initially competitive but finally had to concede 22-10.

Hosts HENLEY returned to winning ways on Saturday with a 117-76 win against GORING to claim 12 league points to the visitors’ two.

On Sunday HENLEY went down to an 83-64 defeat at home to HARWELL as the visitors triumphed on four rinks to claim 12 league points to the hosts’ two. Norman Daniells’ triple with Len Snelgrove and Di Woodford went down 19-10, Richard Kingston’s triple with Angelika Crisa and Andy Scott 20-8, Peter Borsberry with Jeanie Davies and Bill Outram 20-9 and Frank Powell with Trish Jones and Barrie Davies narrowly 16-15. David Burdon’s triple with Jim Woodford and Theresa Dombey prevented a whitewash as they triumphed 22-9.

SHIPLAKE ran out comfortable 120-46 winners in their friendly home match with WOODLEY on Wednesday of last week in a match that saw the hosts win on all five rinks played.

SHIPLAKE consolidated their position at the top of the Oddfellows Triples League last Saturday as they ran out 88-81 winners at home to PALMER PARK.

The hosts won on three of the five rinks played to secure 10 league points to the visitors’ four.

Graham Kennedy’s rink trailed for the whole match before losing 23-16, while Wendy Cross’ rink let a 6-0 lead slip as her rink lost out 16-11.

SHIPLAKE won on all five rinks as they eased to a comfortable 97-55 win at home to TILEHURST on Sunday.

Phyllis Mansfield’s rink fought back from 11-4 down at the half-way stage to narrowly win 15-14 while John Munnelly’s rink came from 6-4 down to triumph 18-13.

CAVERSHAM held its annual gala day on Sunday where 20 teams entered the competition from Berkshire and Oxfordshire. The event, sponsored by Romans estate agents, was won by Richard and Sally Gilbert from Didcot Bowls Club.