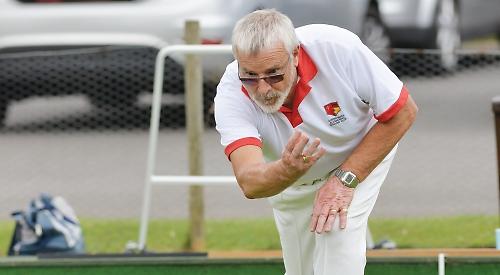 Rink one was a runaway win for the hosts, Clive Goodbourn’s team winning 30-11. Rink two looked set for a home win as well as after 12 ends, the hosts, under Daphne Walker, were 12-6 up. But then Caversham won the next five ends to lead 17-12.

Goring Heath’s one-shot wins on the last three ends were not enough to save the rink, which ran out 17-15 to Caversham.

Rink three was a game of parts. David Watson’s Goring Heath team won the first four ends, then Caversham, under David Ash, won the next four. The two teams then won three ends each to level the game at 13-13 but after 20 ends the hosts had pulled ahead to 22-15, so Caversham needed an eight shot clean sweep on the last end to win.

In the event they were holding four shots when the captains delivered their woods but Goring held on for a 22-16 victory.

SHIPLAKE travelled to TRENTHAMS for a five-rink triples friendly match.

Unusually, all rinks had mesh nets in place to protect the surface, apparently for a county event taking place the following day, which meant the mat could only be placed at the 2m length on each occasion.

Rink one saw Shiplake’s S Reid, C Gutteridge, J Munnelly and G Kennedy get off to a good start, taking five of the first six ends to go 5-2 ahead. Trenthams pulled it back to 5-4 before a run of four ends put Shiplake further ahead, 12–4. The second half saw the hosts build momentum and limit Shiplake to two more ends bringing a nail-biting last end with the visitors hanging on at 14-13. It was then left to captain Graham Kennedy who knocked bowls through to reduce the count back to just a single. With no further change after Trentham’s last bowl, his second attempt left one shot to Trenthams and a 14-14 draw.

In rink two Shiplake’s K Bland, E Robinson, J Bland and M Shepherd took the first two ends but slipped back following a five on the fourth for 2-6. The side then added six shots from three ends to level things up, 8-8 after nine played.

Trenthams then enjoyed a tidy run of five ends with no reply to move into a solid lead, 8-15. Shiplake then secured a two but Trenthams continued their advance to go 10-18 up after 17 ends. Shiplake then switched on and took control of the mat, first with a four followed by a single and a two. The last end was critical but Shiplake picked up another two for an unlikely win, 19-18.

In rink three, Shiplake’s D Lloyd, P Walker, and W Cross struggled to settle early on finding themselves down, 1-6 after five ends and then 3-10 after 10. But a three on the 11th saw a resurgence, adding six more over the next three ends to take the lead, 12-10.

Trenthams levelled up over the next two but three more successful ends for Shiplake moved them into a 21-12 lead with two ends to play. The hosts finished with a two and then a four on the last but Shiplake did enough to come away with a 21-18 win.

In rink four, Shiplake’s V Harris, M Lovejoy and A Reid took a few ends to get going. Initially 0-6 down, a five saw the start of six ends without reply to go 13-6 ahead. By the 14th Trenthams had secured a four and a two to close the gap, 15-14. Shiplake then pulled away again, 18-14. The hosts got three on the 19th before Shiplake took the last two ends to finish worthy winners, 21-17.

In rink five, Shiplake’s D Harris, P Mansfield and J Gutteridge went 6-1 up after six ends but then the hosts secured a run of six ends to move to 6–11 ahead. By the 16th Shiplake were back level at 11-11 but the next three ends went Trenthams’ way which took them into an 11-15 lead. Shiplake managed to take a two on the penultimate end and the rink ended in a draw 15-15 and giving the club three wins and two draws to win overall.

SHIPLAKE LADIES ran out 49-19 winners against PANGBOURNE last Tuesday in a match reduced to two triples as both teams had several players unavailable. Ruth Copp’s triple went ahead after the third end and never looked back. An all-round team performance saw them keep the mat for a run of seven ends to win 27-6.

Sylvia Blackmore’s triple went 0-6 down before fighting back to 6-6 after seven ends. As Shiplake became more accustomed to the green they stayed in touch with Pangbourne, then a six on the penultimate end from the visitors sealed the 22-13 win.