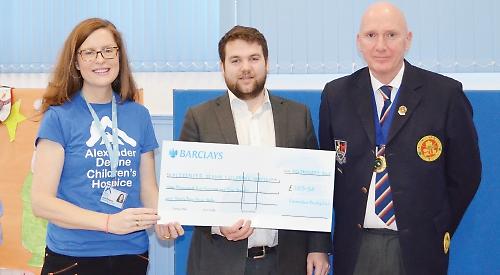 CAVERSHAM Bowls Club has donated £1,105.34 to the Alexander Devine Childen’s Hospice in Maidenhead.

The money was raised at events during last season when Harry Walmsley, of Kidmore Road, Caversham, was president.

These included a raffle, a book sale and several auctions.

Mr Walmsley, 63, a retired highways engineer, said: “A couple of people from within the club nominated the charity and we felt it was a good cause to support. In previous years we have managed about £600 so we are proud of being able to raise almost double that this year.

“It has been a rewarding year for me as president being able to represent the club at a lot of events.”

Mr Walmsley presented a cheque to Julia Philipson, community fund-raiser for the charity, at the club’s annual meeting on Saturday at its base in Albert Road park. Mike Sharp, from the club’s sponsor Romans, was also present.

The charity provides nurses who support children who suffer with life-limiting and life-threatening conditions.

The club’s new president is Mick Fowkes and this year it will be raising money for the Children’s Deaf Society and Eva’s Friends, which funds research into rare neurological conditions in children.