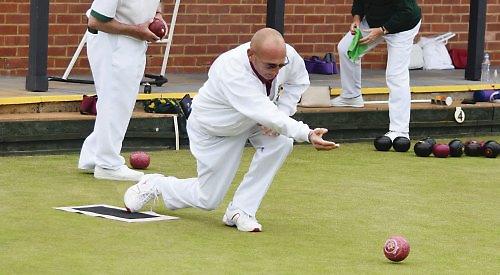 HENLEY maintained their winning streak when they entertained GORING HEATH in a Plomer Cup match on Wednesday of last week.

The home side won on four of the five rinks and by 94 shots to 55 to secure 10 league points to Goring’s two.

The rink skipped by Dave Wilson, with Jenny Wingrove at one and Peter Borsberry at two were Henley’s highest winning rink in a 26-5 victory. Barrie Davies skipped his team of Sally Daniells at two and Brian Duddy at one to a 23-9 win while the rink skipped by Gill Robins with Norman Daniells at two and Richard Kingston at one ran out 18-9 winners.

A closer-fought contest skipped by David Burdon with Nigel Bridges at one and Jo Wilson at two ensued the lead changed several times during the match. With the scores level on the 16th end Henley won the last two ends by four shots giving them a 20-16 win.

The remaining rink skipped by Colin Ward with Jeanie Davies at one and Maurice Robins at two were never in it struggling to find their form as they lost18-7.

On Sunday HENLEY ran out 95-72 winners away to HURST in the Oddfellows Triples League. The visitors, who won on four of the five rinks, picked up 12 league points from the match while the hosts gained two.

The rink skipped by Gill Robins with Norman Daniells at two and David Maybury at one were Henley’s highest winning rink where they triumphed 28-11.

Colin Ward found his form as he skipped his rink, ably assisted Jo Wilson at one and Peter Watkins at two, to a 22-9 win. The rink skipped by Dave Wilson with Lyn Sayer at one and Maurice Robins at two struggled to match their opponents and were behind 9-2 after end seven, turning the game round they scored 10 shots on the next four ends to take a 12-9 lead on end 11 before eventually winning 16-13.

Skip David Burdon, Angelika Crisa at one and Andy Scott at two had a close encounter throughout winning a nail-biting finish 19-18.

The rink skipped by Richard Kingston with David Silvester at one and Sally Daniells at two led 8-3 on end nine. However, the trio allowed their opponents to score 12 shots on the next five ends to trail 15-8 after 14 ends. Henley scored two on the next two ends, then lost six shots on the last two ends to lose 21-10.

SHIPLAKE LADIES ran out 48-32 winners in their home three triples friendly against CAVERSHAM on Tuesday of last week.

On the first rink of Elaine Robinson and Ruth Copp — Pat Walker having to withdraw — Shiplake’s pair meant a third of the final score would be deducted but this made little difference in the end as the home duo dominated the match for the most part. Initially moving into an 18-3 lead the pair ran out 24-8 winners, a result that was reduced to 16-8.

The trio of Jean Webb, Sue Reid and Phyllis Mansfield trailed 5-3 early on before going 16-6 up and eventually running out 20-15 winners.

Sonia Stretch, Pat Steel and Helen Robinson edged 5-1 ahead early on before having the scores levelled at 8-8. The home side went on to win the rink 12-9.

Visitors SHIPLAKE ran out 95-87 winners at SUTTONS on Wednesday of last week in a mixed friendly match that saw them win three of the five rinks.

The green was fast and played well for most of the match that was originally changed to triples due to player numbers but reverted back to rinks as a rink was unavailable on the night so Suttons lent two players to make up the Shiplake numbers.

The rink skipped by Graham Kennedy were trailing 16-9. Shiplake fought back to trail 17-14 before Kennedy secured five shots to help his side win 19-17.

Wendy Cross’s rink were one shot ahead after 11 ends before going behind and eventually losing 27-23. Dave Bullock’s rink were 11-2 down after seven ends and never caught up all match, eventually going down 17-14.

Despite losing on three rinks, SHIPLAKE and visitors SOUTH OXFORD A picked up three Oxfordshire League points each in their close encounter at Memorial Avenue on Thursday of last week.

Dave Webb skipped his much altered side to a 15-1 lead at the half way point putting them on course for their 20-9 win.

Graham Kennedy’s side held their own early on but fell back during the middle period to be 12-5 down. Shiplake fought hard with Dave Harris playing particularly well, securing all remaining ends but they were restricted to singles on each, finishing the match two shots adrift.

Tony Reid had a tussle with some high shot counts going to both sides over the first half but it was a run of three ends against which saw the visitors move into a six-shot lead that Shiplake could not recover from and they had to settle for second place, four shots adrift.

Jim Bland’s side went behind initially but slowly recovered to draw level after eight ends. Three ends against saw the visitors move into a 12-7 lead putting the pressure back on Shiplake. Most ends were now close affairs but on the 16th end, Alan Melville took the jack back a yard enabling his side to capitalise and come away with six shots to put the hosts in front for the first time in the match by just one shot. However, the penultimate end saw three shots against and, although Shiplake won the last, South Oxford restricted it to just a single to take the match 17-16.

Goring could only field four of the usual five triples meaning they had to forfeit two points. Shiplake won overall by 73 shots to 69.

Graham Kennedy’s trio were 7-3 down before fighting back to win 20-13 while Dave Webb’s rink were drawing 9-9 after nine ends before pulling away to win 19-15.

SHIPLAKE ran out 99-59 winners in their home friendly with TRENTHAMS on Sunday in a game that was altered to five triples instead of rinks due to a shortfall of available players for the hosts.

Dave Webb’s trio got off to a good start as they raced into a 10-0 lead before eventually winning 22-8 while Pete Christmas’s rink were 14-5 up after 10 ends before winning 24-7.

The rink skipped by Melvin Stafford took a 6-0 lead before trailing 11-6 at the halfway stage and eventually losing 24-9.