Henley have the edge on travels in league success 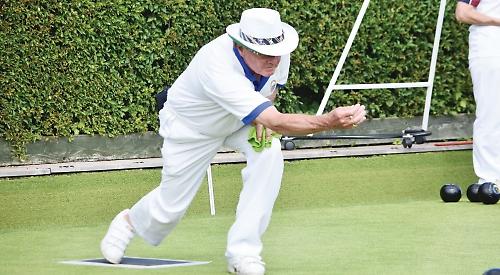 HENLEY had the edge in their Oddfellows Triples League match at BURGHFIELD on Wednesday of last week as they made it five wins in their first six matches of the competition this season.

Despite the match ending in a 75-75 draw, the visitors secured eight league points to the hosts’ four after winning on three of the five rinks.

Two of the Henley rinks tied for the highest rink prize. Gill Robins skipped her rink of David Maybury at one, with Norman Daniells at two, to a 22-9 victory while the rink of Steve Sullivan at one, with Jo Wilson at two and skip Dave Wilson won 20-7.

Henley's other winning rink was a much closer affair when the lead changed hands several times, Barrie Davies skipping his team of Andy Scott at one and Sally Daniells at two to a two shot victory, 16-14.

Not so lucky were the rink skipped by Richard Kingston with Jenny Wingrove at one and Maurice Robins at two who never found their game and were beaten 25-9.

Also struggling to find their form was the rink of skip Peter Borsberry, Brian Duddy at one and Angelika Crisa at two as they were beaten 20-8.

HENLEY welcomed 14 teams from clubs in Oxfordshire, Berkshire and Buckinghamshire to their annual gala day on Sunday to compete for the mixed triples shield, and prizes donated by sponsors A B Walker.

The first round of six end matches, played in a two-league round robin format started at 10am and continued until the end of the last round at 6pm before the six-end final began at 6.15pm.

Within this time there was a break for lunch and tea and during this time the mayor, who is the patron of the club, together with the mayoress and their family made a short visit.

The Palmer Park triple of Margaret Gearing, Jack Hannah and Brian Holland defeated the triple from Harwell with Bob Barnard, Vionne Thornhill and skip John Govans to take the honours. Cynthia Townley, on behalf of Walkers, presented the shield and plaques to the winners.

SHIPLAKE LADIES won on two of three rinks played in their friendly match at SUTTONS on Tuesday of last week as they triumphed 46-33.

Being a player short on the first rink Shiplake were loaned Di Edwards from the hosts as Sylvia Blackmore’s trio won 18-12. The second triple, skipped by Wendy Cross, raced into a 9-2 lead before pulling away to win 17-9.

The rink skipped by Phyllis Mansfield stormed into a 7-1 lead before trailing 11-8 and eventually losing out by one shot, 12-11.

On Wednesday of last week SHIPLAKE crashed to an 86-62 defeat at READING in a five triples friendly match in which the visitors triumphed on two rinks.

The first rink, skipped by Tony Reid, saw Shiplake win the first three ends but the home side hit back to lead 9-3 before going on to win 18-9.

Howard West’s rink were 9-5 down before leading 14-9 after 12 ends. Shiplake held their advantage for the remainder of the rink to run out 15-11 winners. Graham Kennedy’s rink fought back from 9-0 down to level the scores at 13-13 before winning the last end by a shot to recorded a 14-13 win.

This year’s SHIPLAKE ladies versus gents clash for the Margaret Evans Trophy was played on Saturday where the match consisted of one rink and two triples with Mark Belcher agreeing to play for the ladies.

The gents ran out winners by 50 shots to 46 having won on two of the three rinks.

SHIPLAKE avenged their friendly defeat they suffered a month ago when they defeated MARLOW 86-66 at home in a five triples friendly on Sunday where the hosts won on three rinks.

Elaine Robinson guided her rink to an 18-9 win while Dave Bullock’s rink fought back from 11-8 down to win 19-11. Graham Kennedy saw his side get off to a good start, leading 8-4 after six ends before the match unravelled and the visitors ran out 19-12 winners.

Wendy Cross saw her rink lead from start to finish to comfortably win 23-10 while Sylvia Blackmore’s rink trailed 13-3 after nine ends before eventually going down 17-14.