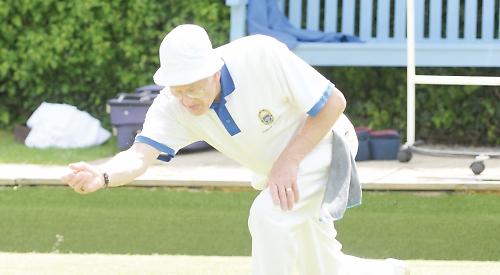 HENLEY secured the bragging rights in their combined Oddfellows Triples League/Plomer Cup win at SHIPLAKE on Wednesday of last week.

Despite the hosts having the better of the rinks — winning 3-2 — Henley recorded big wins in their two wins to triumph 87-80 overall and pick up eight Oddfellows League points to the hosts’ six. In the Plomer Cup each side gained six points.

The rink skipped by Shiplake’s Daphne Jacobs came from behind to lead 10-5 after six ends. The hosts went 17-9 ahead before being pegged back to 18-17. The remaining two ends were close with a single shot firstly going to Shiplake whilst the last end, secured by Henley, also went for a single, leaving Shiplake with a narrow 19-18 win.

The second home triple, skipped by Graham Kennedy, led 11-6 after 10 ends before pulling away to win 23-10. Wendy Cross’s rink found the going tough as they trailed 11-2 before pulling back to 13-8 down. However, Henley pulled away to win comfortably 23-10.

David Bullock’s triple also found the going tough as they went down 23-11 while Sylvia Blackmore saw her trio take a 9-0 lead before being pegged back to 11-9 then pulling away to win 17-13.

SHIPLAKE LADIES ran out winners in their two triples and one pair match at WOKINGHAM on Tuesday of last week. The visitors won two of the three rinks to record a 62-34 shot win.

In the triples matches Phyllis Mansfield’s rink trailed until six ends when they went 7-5 ahead. The hosts fought back to lead 12-9 and, despite Shiplake fighting back, held on to win 12-11. Wendy Cross’s rink came from 5-0 down to lead 10-8 before trailing 12-11. Shiplake fought back to run out 19-15 winners.

In the pairs captain Elaine Robinson and Sylvia Blackmore cruised to a comfortable 32-7 win.

SHIPLAKE lost out on all four rinks as they suffered a 91-51 home defeat against CARTERTON on Thursday of last week in Division 2 of the Oxfordshire League with the visitors picking up all six points.

Jim Bland saw his side compete well over the first eight ends to stay within one shot of Carterton but dropping a five on the 10th followed by three put Shiplake in trouble, 10 shots adrift. Bland saw his side’s fortunes improve over the next five ends but overall, the stronger team performance by Carterton saw them comfortably win 21-15.

David Bullock’s rink were in fine form as they eased to the biggest win of the day, 30-4, while Graham Kennedy guided his triple to a 25-8 win.

On Sunday SHIPLAKE triumphed 91-85 at DESBOROUGH in a friendly match despite losing 3-2 over the five rinks played.

On the first rink skipped by Dave Webb, Shiplake found themselves 13-7 down before fighting back to lead 17-14. However, the hosts had the upper hand as they pulled away to win 21-17.