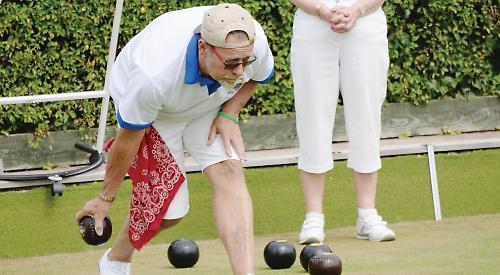 HENLEY lost out by 135 shots to 82 in a six rinks friendly match against visitors LONDON BSA on Thursday of last week.

The hosts, who were short of players and used three from the visitors, found the going tough with the only winning rink skipped by Joan Edwards winning 17-16.

HENLEY got back to winning ways last Saturday when they triumphed 88-61 at WARGRAVE where they won four and drew one of the five rinks played.

HENLEY were put to the sword on Sunday as they went down to a heavy 115-66 defeat at home to THREE MILE CROSS in a five triples friendly.

Several Henley players competed at Palmer Park’s annual gala. Angelica Crisa, Maurice Robins, Richard Kingston, and Gill Robins as skip missed getting into the semi finals despite being seven shots to the good at the end of the four mini leagues.

SHIPLAKE consolidated their position at the top of the Plomer Cup league table after they defeated ALMSHOUSES by 110 shots to 61 at Memorial Avenue on Wednesday of last week. The hosts picked up all 12 league points from the match.

Wendy Cross’s rink were in trouble early on in their match as they trailed 9-0. However, the hosts fought back to 15-11 down before surging ahead late on to win 16-15.

SHIPLAKE were plunged into relegation trouble on Thursday of last week after they suffered a 94-53 defeat at CHIPPING NORTON in Division 2 of the Oxfordshire League.

The visitors lost all four rinks and picked up no points while Chipping Norton secured six. Shiplake now have two matches remaining in the season against higher placed clubs to secure survival.

Captain Dave Webb’s rink experienced a frustrating evening where they secured just two ends over the first half. An improved second half brought them within four shots before conceding the last three ends to lose 21-14. Graham Kennedy put in a spirited performance, starting well by winning the first three ends but dropped a six on the sixth to go behind and eventually losing 19-16.

Pete Christmas had a tough evening as skip against a side who gave very little away, just a single over the first nine ends as his rink went down 25-7 while Jim Bland’s rink went down 29-16.

Sunday saw SHIPLAKE’S Millennium Triples competition played out by seven drawn teams in four rounds of five ends with the two most successful teams playing each other for the trophy.

The final was played over four ends and it was Team E of Ruth Copp, John Snook and Dave Webb who began much the better to get the early lead before thwarting Team A of Sonia Stretch, John Gutteridge and Daphne Jacob from taking anything until the last end. This proved to be just a consolation as Team E ran out 6-1 winners.