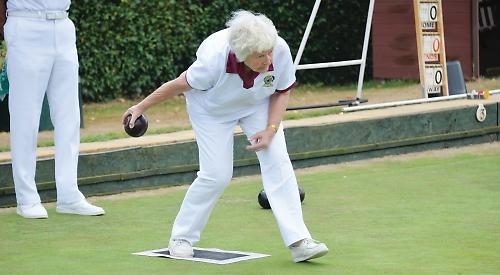 HENLEY secured all 12 points from their Plomer Cup match at GORING HEATH on Wednesday of last week after winning on all three rinks.

The highest winning rink for Henley was skipped by Barrie Davies with Angelika Crisa at one, Steve Sullivan at two and Colin Ward at three, taking the lead on the first end they rallied to a 14-0 lead by end eight, before finally winning 27-10.

The rink skipped by Gill Robins with David Maybury at one, Jeanie Davies at two and Norman Daniells at three, were leading 14-0 after 14 ends, finally winning their match 24-15.

The rink skipped by Peter Watkins with Richard Kingston at one, Maurice Robins at two and Sally Daniells at three, had a closer encounter being level 13-13 after 13 ends, and behind 17-15 on end 17 they won the remaining four ends to triumph 23-17.

Henley’s friendly match at Farley Hill on Sunday was cancelled due to the inclement weather.

SHIPLAKE triumphed in the Oddfellows Triples League after winning 84-80 at PANGBOURNE on Wednesday of last week.

The visitors won on two rinks, drew on two and lost on one as they secured 10 league points to the hosts’ four.

The first rink, skipped by Wendy Cross, saw Shiplake take a 7-5 lead before trailing 15-8 after 13 ends. The close encounter ended with the rink being drawn, 16-16. John Gutteridge’s triple crashed to a 21-10 defeat while Graham Kennedy’s trio fought back from 9-2 down to draw 15-15.

Jim Bland’s rink raced into a 13-0 lead before eventually winning 21-15 while Syliva Blackmore’s rink led from start to finish to secure a 22-13 win.

Relegation-threatened SHIPLAKE turned the tables on promotion-chasing WITNEY TOWN on Thursday of last week in their penultimate Oxfordshire League encounter as the hosts won on all four rinks, 87-56. Shiplake secured all six league points from the fixture.

Jim Bland’s rink got into their stride from the third end to move into a seven-point lead but Witney Town, with help of a four on the ninth, managed to level the scores after 14 ends. Shiplake held firm to win 20-11.

Graham Kennedy’s rink were level at the halfway stage. The visitors moved ahead but a five-shot haul on the 12th was the turning point that then saw another three ends go Shiplake’s way, putting them eight shots in front. Kennedy’s rink eventually won 23-13.

Dave Webb saw his side dominate proceedings from the start to win 23-16 while Barry Lambourne’s rink triumphed 21-18.

SHIPLAKE ran out 80-46 winners in their home friendly with a depleted TWYFORD side on Saturday. The match, which was originally scheduled to be played over six rinks, was reduced to four as the visitors were short of players. Shiplake’s Ruth Copp played for the visitors.

Dave Webb’s rink, up against Copp’s Twyford, crashed to a 25-10 defeat while Melvin Stafford’s rink led from start to finish to secure a comfortable 28-7 win. Pete Christmas guided his rink to a 26-8 win while Howard West’s rink triumphed 16-6.

SHIPLAKE maintained their push for the Oddfellows Triples League title on Sunday as they ran out 102-49 winners at UNIVERSITY OF READING to pick up 13 points to the hosts’ one.

The match was reduced to just four triples as the hosts were short of players on a wet and blustery afternoon.

David Bullock’s rink romped to a comfortable 37-8 win while Graham Kennedy’s trio were involved in a much tighter game, coming from 17-12 down to draw 19-19.