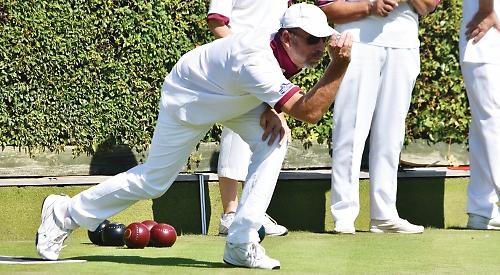 HOSTS PALMER PARK gained revenge against HENLEY in the Oddfellows Triples League on Wednesday of last week as they ran out 106-73 winners.

The hosts, who won on three rinks, drew on one and lost on one, picked up 11 points from the match as opposed to Henley’s three.

Henley’s only winning rink was skipped by Colin Ward with Andy Scott at one and Sally Daniells at two. The rink was 9-9 after nine ends before Henley dominated the second half and won 22-10.

The drawn rink skipped by Gill Robins with Mick Belcher at one and Norman Daniells at two were ahead by one shot on end 14 and by the 17th end they had extended their lead to 17-11. However, dropping a six on the last end they had to settle for a draw, 17-17.

The rink skipped by Peter Watkins with Joan Edwards at one and Peter Borsberry at two, were overpowered by their opponents, and were defeated 29-11.

The rink skipped by Richard Kingston with David Maybury at one and Jeanie Davies at two, also found their opponents too strong and lost by 26-11. Barrie Davies skipped his rink of Angelika Crisa at one and Steve Sullivan at two but suffered the same fate, going down 24-12

HENLEY went down to a 67-57 defeat at HEADINGTON on Saturday in a friendly match that saw both sides wins two rinks each.

HENLEY lost out in a combined Oddfellows Triples League and Plomer Cup match at home to local rivals SHIPLAKE on Sunday. The home side won on two rinks whilst Shiplake won on three to secure an 87-79 win and pick up 10 Oddfellows Triples League points to Henley’s four and eight Plomer Cup points to the hosts’ four. Henley’s highest winning rink was skipped by Richard Kingston with Jeanie Davies at one and Frank Powell at two winning on 11 of the 18 ends to run out 24-10 winners.

Henley’s second winning rink was skipped by Barrie Davies with Angelika Crisa at one and Norman Daniells at two, they had a closer game throughout but eventually triumphed 15-10. Peter Borsberry’s team with Trish Jones at one and Steve Sullivan at two, although sharing winning nine ends apiece, the visitors scored more on their ends won and finished 25-14 winners.

The rink skipped by Dave Wilson with Andy Scott at one and Sally Daniells at two, found their opponents too strong and were always trailing eventually losing by 26-16. The rink skipped by David Burdon with Theresa Dombey at one and Colin Ward at two were behind 9-1 after seven ends but found some form in the second half, and finished only six shots behind as they lost 16-10.

SHIPLAKE’S hopes of survival in Division 2 of the Oxfordshire League are now out of their hands after they went down to a three rinks to one defeat at SOUTH OXFORD A on Thursday of last week.

Going into the game Shiplake needed to pick up at least three points from the match otherwise it would be in Chipping Norton’s hands who have a game in hand. As it was Shiplake picked up just one point to the hosts’ five.

Matt Shepherd’s rink went behind early on and although they fought hard to come back into the match the home side proved too strong in the latter stages as Shiplake lost 21-12. Graham Kennedy’s side also found the going difficult and were comfortably beaten 19-10.

Tony Reid managed to ensure his side dominated much of his match and came away with Shiplake’s only win of the match, 23-9. Meanwhile Dave Webb’s side put in a good performance to keep in contention only to see his side pipped on the very last end, by the South Oxford skip, Mobley, playing on to Shiplake’s the shot wood to hold and secure the end and rink 14-12. With Chipping Norton securing four points the same evening, they just need four points from their last match away against relegated Hanborough to go above and send Shiplake into Division 3 next season.