Henley and Shiplake have mixed fortunes in cup ties 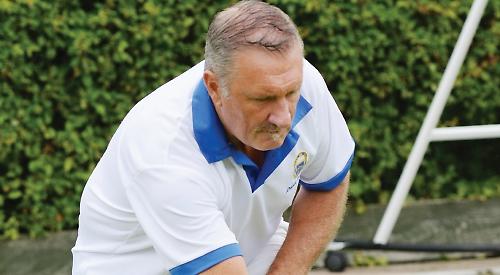 HENLEY came away from HAGBOURNE with a 67-67 draw in the men’s four triples friendly that took place on Wednesday of last week as both sides won two rinks each.

Highest winning rink for Henley was skipped by Norman Daniells and with David Maybury at one and Andy Scott at two they won 22-13. A much closer affair saw Barrie Davies skipping his rink of Brian Duddy at one and Nigel Bridges at two, winning by just one shot, 15-14.

Another close encounter saw Peter Borsberry’s rink with Mick Belcher at one and Keith Lawrence at two narrowly beaten 18-16. The rink of Frank Powell with John Rees at one and David Silvester at two lost 22-14.

Last Saturday HENLEY ran out 86-69 winners in their home Plomer Cup match against DIDCOT. This resulted in the home side picking up 10 points to the visitors’ two.

The highest home winning rink was skipped by David Burdon, Lyn Sayer at one and Peter Borsberry at two who triumphed 23-7.

Barrie Davies’s rink of Mick Belcher at one and Joan Edwards at two also scored steadily running out winners 23 shots to 12. The rink skipped by Colin Ward with Angelika Crisa at one and Andy Scott at two won 20-12.

David Wilson’s rink with John Rees at one and Jeanie Davies at two were 12-4 up after 10 ends but then allowed their opponents a comeback and were only two shots ahead on end 17 but then gained the advantage by two shots on the 18th to win 15-11.

The rink skipped by Richard Kingston, David Maybury at one and Romy Painter at two found their opponents formidable as they went down 27-15.

On Sunday HENLEY lost out in their five triples Plomer Cup clash at home against CAVERSHAM. The visitors won on three rinks with Henley winning on two as the hosts picked up four points to the visitors’ eights.

Henley’s highest winning rink was skipped by David Wilson with Frank Powell at one and Theresa Dombey at two and they found themselves 7-0 down after three ends. They scored 10 shots on the next four ends to lead 10-8 on end seven, then scored a seven on end eight and only allowed their apponents to score two shots to the end of the match to win 27-10.

Henley’s other winning rink skipped by Barrie Davies, Trish Jones at one and Peter Borsberry at two were 8-0 down after three ends. They then scored 13 shots on the next four ends to lead 13-8 before scoring steadily to win 24-18.

Peter Watkins’s rink with Mick Belcher at one and Joan Edwards at two had a close encounter the whole afternoon and only lost by one shot, 11-10, on the last end.

SHIPLAKE consolidated their position at the top of the Plomer Cup table with a 94-67 home win against WATLINGTON on Wednesday of last week.

The visitors won three of the five rinks with Shiplake triumphing on the remaining two as the sides picked up six points apiece.

Tony Reid’s rink trailed all match before finally losing 17-13 while Wendy Cross’s rink were 10-7 ahead after 12 ends before eventually losing out by one shot, 14-13. Graham Kennedy’s rink eased to a comfortable 34-6 win wile Dave Webb’s rink went down 19-16. Matt Shepherd helped his rink to an 18-11 win.

SHIPLAKE came out on top in their away Plomer Cup at GORING HEATH (ALMSHOUSES) on Saturday. Both sides won one rink each with the third being a draw as Shiplake narrowly won 49-48 to secure 7.5 points to the hosts’ 4.5.

SHIPLAKE narrowly lost out 98-88 in their third consecutive Plomer Cup match at DIDCOT on Sunday. The hosts and visitors both won two rinks each and drew on one as the visitors gained five points to the hosts’ seven.

Melvyn Stafford’s rink found the going tough as they trailed 8-7 early on before eventually going down 28-12.

Elsewhere it was confirmed that Shiplake’s Oxfordshire League side were relegated from Division 2 after Chipping Norton defeated Hanborough to secure safety.