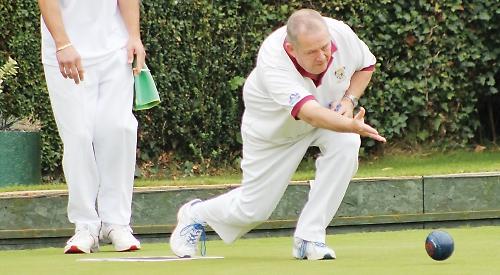 HENLEY ran out comfortable 131-59 winners at PANGBOURNE on Wednesday of last week in an Oddfellows Triples League match.

The visitors, who won on four of the five rinks, picked up 12 league points to the hosts’ two.

The highest winning rink for Henley was skipped by Barrie Davies with Angelika Crisa at one and Peter Borsberry at two who triumphed 31-6.

Colin Ward skipped his rink with Theresa Dombey at one and Andy Scott at two to a 27-14 victory.

The rink skipped by Peter Watkins with Romy Painter at one and Jeanie Davies at two had a mixed afternoon leading 8-2 after five ends, they allowed their opponents to score 14 shots on the next five ends to trail 16-8. Henley won the next five ends to close the gap to one shot on end 15 before finally finishing the game two shots in arrears, 19-17.

On Thursday of last week HENLEY went down to a 72-68 home defeat in a four triples men’s match against MAIDENHEAD TOWN.

The rink skipped by Barrie Davies with Jim Woodford at one and Andy Scott at two won by 24 shots to 13.

Peter Watkins skipped his rink with David Silvester at one and John Cross at two to a one-shot advantage winning 17-16.

The rink skipped by Richard Kingston, with Mick Belcher at one and Norman Daniells at two, led after three ends 3-2 then gave away four shots to trail 6-2. They spent the rest of the game hanging on to Maidenhead’s shirt-tails before finally conceding their match 19-16. The rink skipped by Peter Borsberry with Len Snelgrove at one and Keith Lawrence at two found their opponents just too strong and were always behind before losing their match 24-11.

Notable events were the club’s singles championship which for the men was won by Barrie Davies, and for the ladies, by Sally Daniells.

In a close climax to the finals a 12-end two-wood final was played for by the two champions to see who would become champion of champions.

This was decided on the last end by one shot with the honour going to ladies champion Sally Daniells.

By winning the club’s championships Davies and Daniels qualify to enter their respective Oxfordshire Counties Champion of Championships events later this month.

SHIPLAKE held their end of season finals over two days on Friday of last week and Sunday.

Over the course of the two days several players picked up multiple trophies, namely Mark Belcher who won both the drawn pairs and two-wood pairs plus the handicap title, Wendy Cross secured the ladies’ championship final and the 91-up final, Barry Lambourne won the men’s championship and the two wood singles and plate while David Lloyd won the drawn pairs and the two-wood pairs.

On Friday Wendy Cross beat Jackie Stafford 21-17 to secure the ladies’ singles while Barry Lambourne came from behind to beat Tony Reid to win the men’s singles. In the novices competition John Gutteridge and David Lloyd were level at 5-5 and 13-13 before Gutteridge pulled away to secure the trophy. The remainder of the club’s finals took place on Sunday.

In the 91-up competition Wendy Cross defeated Melvin Stafford 92-78 while David Lloyd and Mark Belcher beat Sue Reid and Wendy Cross 15-9 to secure the two-wood pairs title. In the plate handicap competition Barry Lambourne ran out 21-15 winner against Matt Shepherd.