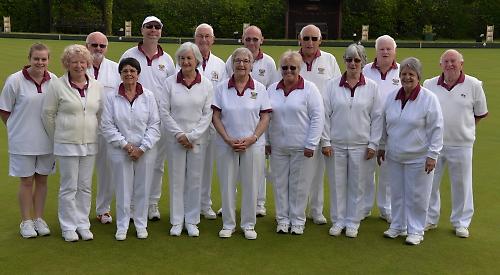 The best rink for Henley was David Burdon’s triple, who after 13 ends were 11 shots all, but pulled away strongly by winning four of the last five ends to double their shots score to win 22-12.

Skip Gill Robins’ triple romped away to lead 11-3 at halfway then lost their way leaving them one shot ahead after 17 ends. A decisive three shot win on the last end allowed them to take the game 16-12.

Barrie Davies’ triple built up an eight shot lead after 10 ends but five ends later had slipped to 19 shots all and managed to claim two shots on the last end to claim a draw 21-21.

Peter Borsberry’s triple won the first end and lost the next nine in a row to be 11-3 down. A spirited fight back, including a five and two on the last end secured a draw 15-15.

The triple skipped by Frank Powell won the first two ends, lost the next six, won six of the next eight to be one shot ahead with two to play which went to their opponents resulting in an 18-16 loss.

HENLEY picked up their second win in as many days as they defeated visitors THAME in a five-rinks mixed triples friendly on Sunday by 85 shots to 72.

Henley’s best triple was led by Gill Robins who was eight shots to five ahead at halfway then forged ahead scoring heavily while conceding three shots on two ends to give a scoreline of 24-8.

The triple of Barrie Davies’ settled quickly and continued to outscore their opponents finishing 10 shots to the good, winning 20-10.

Dave Wilson’s triple had a close match with the lead changing six times before their opponents scored the only shot on 10 last end so losing 15-14.

Skip Frank Powell’s triple were behind from the start but restricted their opponents to a one shot win on eight of the 12 ends they won and a five shot win on the last end made the result 17-12 to the visitors.

SHIPLAKE lost out by 75 shots to 67 and 10 points to four in their opening Oddfellows Triples League match of the season at BURGHFIELD on Wednesday of last week in a game played out in persistent rain.

Matt Shepherd’s triple were leading 13-9 after 14 ends before and three and a four for the home side saw Burghfield win 17-14. Jim Bland’s rink were trailing 16-1 after 11 ends before fighting back a little before going down 19-7.

Wendy Cross’s rink had the best result of the match for Shiplake as they won 18-10 while Graham Kennedy’s rink went down 17-11. Barry Lambourne saw his side pegged back to 9-9 after leading 9-1 but eventually went on to win 17-12.

SHIPLAKE went down by 100 shots to 48 and 5.5 points to 0.5 in their opening Oxfordshire League match of the season at BICESTER on Thursday of last week. Tony Reid saw his side knocked for six on the third end setting the home side on their way to a large score at the close of play as they went down 34-6. Dave Webb’s side had an equally torrid time and although they secured a few more shots to gain double figures they suffered a 32-10 defeat.

Graham Kennedy saw his side also fall behind but a six on the seventh end brought them level and then went on to gain a promising five shot lead when his opponents turned the match back in their favour to win 19-17.

Jim Bland’s rink saw a close battle early on but with Bicester just having the edge. Shiplake kept themselves in the match however and one particular shot from Jim was key, taking out a Bicester bowl cleanly to secure three shots. This gave Bland some momentum, enough to move into a two shot lead with one end to go but Bicester managed to secure a two on the last to draw the match.

Melvin Stafford’s rink were drawing 8-8 after 10 ends before pulling away to win 19-16 while Wendy Cross saw her rink dominate to run out 28-11 winners. Jim Bland’s rink, playing as a triple, eased to a 25-9 win while Sylvia Blackmore’s rink saw the only setback of the day for the visitors as they went down 23-15. Dave Webb guided his rink to a 24-11 win.

SHIPLAKE and WATLINGTON settled for six points each from their Plomer Cup clash at Memorial Avenue on Sunday in a match that saw the hosts win 99-86 on shots but the visitors triumph on three of the five rinks.

Shiplake lost out on the first two rinks played with Dave Bullock’s trio going down 20-10 while Dave Webb’s side lost 23-15 in a match that saw Colin Scott make his debut for the visitors.

Graham Kennedy guided his rink to a 27-15 win while Wendy Cross gained the best win of the day on all five rinks as her trio won 35-7 in a clash that saw Phil Potts play his first ever game of bowls for the visitors. The final rink, skipped by Matt Shepherd, lost out 21-12.