Wilson’s rink hits back to help side gain league win 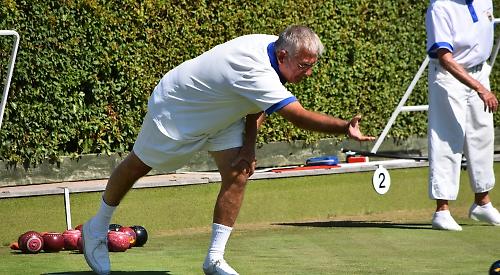 HENLEY ran out winners in their home midweek match against BURGHFIELD in the Oddfellows Triples League on Wednesday of last week.

The home side won on four of the five rinks and by 76 shots to 73 to secure 12 points to the visitors’ two.

Skip Dave Wilson’s triple were trailing 16-3 after nine ends and in a remarkable turnaround scored 16 shots whilst conceding a single shot to finish 19-16 to the good.

Colin Ward’s triple were 6-4 down after nine ends and lost the next two ends before scoring five shots on 14th end to level the scores. Two ends later it was still level then Henley lost the penultimate end to go one shot down but holding their nerve scored two shots on the final end to secure a one-shot win.

The triple of Gill Robins were 13-5 down after nine ends but in a good fight back won the next five ends to level at 13-13. Losing the next end by one shot spurred them on to win the remaining three ends to finish with a 19-14 scoreline.

Barrie Davies’ triple were 10-5 up after nine ends before they steadily increased their lead to end up 19-10 winners.

David Burdon and his triple experienced the shots difference increasing in their opponents’ favour for much of the rest of the match, to go down by 15-6.

HENLEY held their annual gala on Sunday with local teams and those from adjoining counties competing for the Mixed Triples Shield and prizes donated by sponsors A B Walker, the funeral directors.

After the round-robin matches in the two leagues were completed, tea was taken, during which the raffle was drawn by the sponsor’s representative. Then followed the final between each league winner — Palmer Park from Reading and Wargrave.

Palmer Park won the first end, Wargrave the next two giving them a 4-1 lead. Palmer Park retaliated taking the fourth and fifth ends each by three shots to lead 7-4. The tension was palpable as after six woods from each team Wargrave were holding three shots. After two woods from each skip, Wargrave thought they had another wood in the head and as the final two woods just failed to alter the head, a measure of the woods nearest to the jack confirmed victory to Wargrave, 8-7.

SHIPLAKE went down to a 98-95 home friendly against READING on Wednesday of last week in a match that saw the villagers win on one rink, draw on one and lose on the remaining four.

On the first rink skipped by Barry Lambourne the match was even after six ends with the home side 5-4 ahead. However, the home side then won 10 ends without reply to eventually win 24-6.

SHIPLAKE crashed to a 78-52 Oxfordshire Division 3 defeat away at bottom of the table HANBOROUGH on Thursday of last week. The visitors, who lost out on all four rinks, failed to pick up any league points whilst the home side gained six.

Rob Webb took on skip duties on the first rink and was looking in trouble after seven ends being 12 shots behind. Rob Webb and his side fought well and managed to secure seven of the next nine ends but the two ends against meant they were still eight shots adrift as they went down 22-14.

Dave Webb also saw his side in trouble early on, 11-3 down after 10 but came back to within three shots two ends later. Hanborough were proving too strong on their own patch and restricted Dave Webb to just two more singles for a comfortable 21-10 home victory.

Jim Bland saw a close battle over the first half with scores level after nine ends but a five followed by a three looked to put his side in a strong position. Realising the advantage of longer Jacks, the hosts took the game away to move four shots in front, following a five going against Shiplake before eventually winning 19-17.

Graham Kennedy saw another close first half, coming out a single shot ahead after nine low scoring ends. The tenth end then proved significant with a dropped five putting the home side in command. Shiplake found it hard going once again to score sufficiently despite securing half of the remaining eight ends as the home side won 16-11.