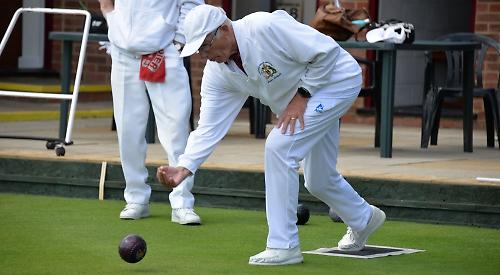 HENLEY ran out winners in their home five mixed triples friendly against MAIDENHEAD THICKET on Thursday of last week by 85 shots to 83.

Barrie Davies’ triple raced ahead from the start to be 15-1 up after nine ends and although their scoring rate reduced with their opponents winning a further three ends, they finished best of the day with a 24-5 win.

The triple led by Frank Powell were ahead after the 12th end when there were a couple of fortunate rubs for their opponents and one which disadvantaged the home team and found themselves losing the last six ends to go down 25-16.

The triple skipped by Richard Kingston, with debutant Bill Newens, scored steadily and were untroubled throughout the game being 12-6 up at half way and finishing 21-10 to the good.

Joan Edwards’ triple, although 7-1 down after three ends fought back to be 9-9 after nine ends but then dropped a five on the next end and reduced the deficit to three shots after 14 ends. Not scoring again meant the rink went down 22-12.

The triple of Peter Borsberry, with debutante Bonnie Newens, were 14-4 down after 10 ends then outscored their opponents over the next five ends to be just four shots down but losing out on the four remaining ends lost 21-12.

HENLEY triumphed in their home Oddfellows League match against HURST on Sunday by 90 shots to 85 in a match in which they won on three rinks and gained 10 points to the visitors’ four.

Colin Ward’s triple found themselves 10-5 down after nine ends and then reduced the deficit only to see the jack knocked back to benefit their opponents who then won the last three ends to lose 22-11. Skip Barrie Davies led his triple to lead 13-5 at half way and four ends later increased that to 20-6. A mini fight back over the last five ends by their opponents changed the shots difference to a 22-12 win.

Dave Wilson’s triple were nip and tuck and level after 11 ends at 8-8. Thereafter they took control by winning all but two of the remaining ends to win 20-10.

David Burdon’s triple suffered the loss of six consecutive ends before recovering to outscore their opponents over the last eight ends, just failing to catch them up, losing out 23-14.

Hosts SHIPLAKE had the edge against HENLEY in an evenly fought out joint Oddfellows League and Plomer Cup match at Memorial Avenue on Wednesday of last week.

Honours were even in terms of wins on rinks with both sides picking up two each and one being a draw in a match that saw Shiplake come out on top by 85 shots to 80. In terms of competition points, Shiplake gained seven in the Plomer Cup to Henley’s five and nine in the Oddfellows League to the visitors’ five.

Shiplake got off to a slow start on their first rink skipped by Jim Bland but made up for it on the seventh by taking a five which was immediately followed by four as they won 20-11.

Wendy Cross’s rink trailed all match and found themselves 20-6 down before fighting back but eventually lost out 22-16 while David Bullock’s rink had an evenly fought match as they were all square at 4-4, 8-8, 9-9 before eventually drawing 17-17.

Graham Kennedy’s rink trailed 14-7 before closing the gap to 16-14 but eventually lost out 17-14 while Matt Shepherd saw his rink lead all match to eventually run out 18-13 winners.

SHIPLAKE went down to a 78-72 home defeat in their Oxfordshire League Division 3 clash with visiting league leaders BICESTER on Thursday of last week. The home side picked up one point from the match to the visitors’ five.

Jim Bland got off to a strong start but his side were pegged back by some positive bowling from Bicester that kept them within two shots after seven ends played. Bland’s rink began to score more and more readily, winning eight of the following 11 ends to eventually win 35-10.

Graham Kennedy’s rink got off to a poor start but came back to within two shots at the halfway mark before eventually going down 18-15. Barry Lambourne’s rink won the first two ends but once Bicester got the jack it proved difficult to shake them off as they eased to a 26-7 win.

Dave Webb’s side began well but soon found themselves in trouble as Bicester took control to gain a 24-15 win.

SHIPLAKE ran out comfortable 103-68 winners in their Oddfellows League clash at MAIDEN ERLEGH on Saturday in a match that saw the visitors gain 11 points to the hosts’ three.

Wendy Cross’s rink came from four shots behind to claim a 23-8 win while David Bullock’s trio led all match before eventually recording a 19-12 win.

Graham Kennedy saw his rink trail all match before going down 19-16 while Jim Bland guided his rink to a comfortable 24-8 win.

The final rink, sipped by David Webb, found themselves 21-17 ahead before eventually being held to a 21-21 draw.

David Bullock guided his trio to a 20-7 win while Jim Bland found his rink 10-6 down on the 10th end before Shiplake clawed their back to win 13-12.

Wendy Cross’s rink had a difficult afternoon as they went down 20-10 while David Webb saw his trio come from 9-4 down to win 15-13.

Elsewhere on Sunday SHIPAKE LADIES lost out in their home quarter-final Ladies Top Club clash with SOUTH OXFORD by 74 shots to 69.

The singles saw Margaret Bullock secure a good 21-12 win against Gill Buckett while the pairs saw a close battle, led by Jackie Stafford and skipped by Jean Buckett. The match was nip and tuck all the way but Shiplake were just out gunned by the South Oxford pair who triumphed 22-19.

The triples of Sue Reid, Elaine Robinson, Wendy Cross were up against a formidable trio skipped by Carol Mobley and they just could not get into the match as they went down 23-11.

The rink of Clare Gutteridge, Helen Robinson, Jean Webb and Daphne Jacob saw a close match indeed and in the end everything hinged on its outcome with Shiplake needing to win by six shots to level things up overall and possibly force an extra end. However, South Oxford had the edge as they triumphed 18-17.