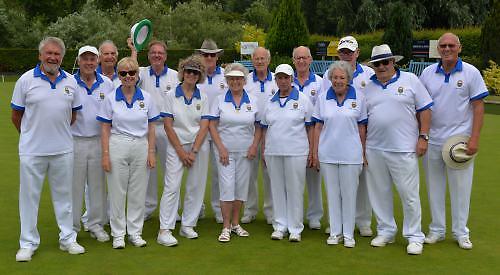 HENLEY ran out winners in their five rinks mixed triples home friendly match with TRENTHAMS on Wednesday of last week. The hosts won on all the rinks on their way to a 117-61 victory.

Skip Barrie Davies’ triple started with a four on the first end and their score increased at halfway to 14-6. With both triples scoring five shots each in the second half the result became a 19-11 win.

Will Girvan, skipping for the first time in an inter club match, led his trio to be nine shots up after three ends but saw this lead reduced to four shots at halfway. The fillip of a four two ends later followed by winning four of the last five ends gave them a 25-14 victory.

The triple skipped by Richard Kingston won the first end then lost the next five to be 8-2 down. They then won the next nine ends, losing ends 16 and 17, and scoring a three on the final end to record a 24-10 win.

Skip Dave Wilson’s triple were 5-5 after five ends then scored freely, including a seven, while their opponents claimed seven shots more to finish 33-12 winners.

In the closest rink of the evening Peter Borsberry’s triple were never headed and although their lead fluctuated it came down to two shots at the end with a final score of 16-14.

Despite having an 1-13 lead after 12 ends Peter Borsberry’s triple let slip their lead to be level after 16 ends at 18-18. Dropping five shots and gaining two on the last two ends resulted in a 23-20 defeat.

The rink led by Richard Kingston struggled to keep in touch with their opposing triple, not helped by dropping a five on end six and although winning three of the last five ends went down by 22-7.

Skip Peter Watkins’s triple were 13-3 down after seven ends. Although scoring two shots more than their opposition trio for the rest of the game they lost out 20-12.

Norman Daniells’ triple recovered well from being 9-1 down after six ends to reduce the deficit to two shots on the 17th end but lost the last end to lose 14-11.

HENLEY got back to winning ways on Sunday as they ran out 67-61 winners at THREE MILE CROSS in a four rinks mixed triples friendly.

Frank Powell with Bonnie Nervens and Trish Jones raced into an 8-2 lead after five ends with the opposition pulling it back to 15 -14 after 16 ends. Henley eventually ran out 17-14 winners.

Steve Sullivan, skipping in his first representative match, with John Spiers and Romy Painter were level at 10-10 after 10 ends, but dropped five shots over the next five ends to eventually lose 19-12. Peter Borsberry with John Rees and Kevin Browne were leading 10-8 after nine ends before the scores levelled after 17 ends. Borsberry picked up a three on the last end to win the rink 18-15.

Andy Scott with Bill Nervens and Joan Edwards were always struggling up to the 10th end as they railed 8-6. They then picked up 14 shots on the next five ends to eventually run out 20-13 winners.

Before the start of SHIPLAKE’S matches played on Wednesday and Thursday of last week, a minute’s silence was held in memory of club member Philip Buckett who sadly passed away the previous weekend.

On the Wednesday ALMSHOUSES were the visitors to Memorial Avenue where the hosts ran out 112-65 winners in a Plomer Cup match to secure 11 points to one as they won on four rinks and drew on one.

On Thursday SHIPLAKE leapfrogged visitors BANBURY CENTRAL B into fourth place in the Oxfordshire League Division 3 table after running out 108-47 winners on their way to secure six points to one as the home side triumphed on all four rinks.

Jim Bland’s rink began reasonably well but then fell four shots behind after eight ends before going on to win 22-13 while Graham Kennedy’s rink went 6-1 down after six ends before coming back to win 28-12.

Barry Lambourne’s rink piled on the shots with fours, fives and a six all adding to give Shiplake a 36-2 lead after 13 ends and eventually a 37-12 win while Dave Webb saw his rink triumph 21-10.

On Sunday home side SHIPLAKE defeated GORING in their latest Oddfellows Triples League match by 84 shots to 71 to secure 10 points to the visitors 4 as the Memorial Avenue side triumphed on three of the five rinks.

Following an even first five ends, David Bullock’s rink pulled away to win 18-8 while Graham Kennedy’s trio led all match to triumph 23-11.

Howard West saw his side 8-3 ahead after nine ends before pulling away to record the best win of the day for the home side, 21-9.