Away win puts side top of triples league 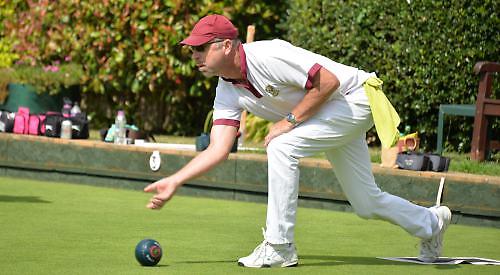 HENLEY ran out comfortable 101-57 winners on Wednesday of last week in their Plomer Cup match against visitors GORING HEATH to secure 10 of the 12 points on offer.

Skip Gill Robins’ rink were nine shots up without reply after five ends and saw their lead reduce to six after 11 ends then scored a further 10 shots and dropped four to increase their lead to 12 shots as they won by 21-9.

The triple of Colin Ward raced away to be 16-3 up at half way but a six shots over three ends revival by their opposition was snuffed out with a five on end 13 and six further shots on three ends gave them a 27-11 win.

Norman Daniells’ triple led 9-1 after five ends and increased the margin to 12 shots after 11 ends. After losing the next two ends and five shots they asserted themselves again taking the last five ends to win 24-9.

Winning the first six ends saw Barrie Davies’ triple lead by 10 shots. Their opponents got on the scorecard for four of the next six ends but sharing the final third of ends gave the home trio an 18-10 win.

On Sunday HENLEY lost out by 91 shots to 81 at home to FARLEY HILL in a five rinks mixed triples friendly.

Skip Norman Daniells’ triple struggled for the first few ends but by halfway were 10-9 ahead. Droppng only two ends in the second half they ran out comfortable 27-14 winners.

The triple of Peter Watkins were seven shots down after four ends and scoring on the next three reduced the arrears to one shot. Their opponents scored on the following three ends to be 16-6 up. Despite winning six of the last eight ends, they dropped six shots on the two they lost and finished losing 22-15.

Richard Kingston’s triple were 7-3 up after seven but strayed from the line as their opponents found it, losing the next nine ends and giving away 14 shots in the process. Some consolation came in winning the last two ends to reduce the arrears 17-10 defeat.

Skip Peter Borsberry’s triple were 6-1 down after five ends and 8-7 up at halfway. A five on the next end gave them a lead which they held as they shared the remaining ends although scoring two fewer shots finished 18-14 winners.

The triple of Frank Powell trailed 8-6 at half way but a five and a four virtually took the game away from them as they lost 24-11.

SHIPLAKE came away with an emphatic win at PANGBOURNE on Wednesday of last week in their Oddfellows Triples League clash.

All five Shiplake triples secured a win to give the visitors a maximum 14 points that propelled them to the top of the table.

SHIPLAKE remain in the hunt for second spot in Division 3 of the Oxfordshire League despite going down to an 85-64 defeat at BLOXHAM on Thursday of last week.

The result saw the visitors pick up two wins to the hosts four in a match that saw both sides triumph on two rinks each.

Jim Bland saw his rink trail by 10 shots after seven ends before hitting back to win 18-17 while Dave Webb saw his trio suffer the biggest reverse of the match as they went down 32-14.

Last Saturday saw SHIPLAKE run out 78-57 winners in a four triples friendly at TWYFORD in a match that saw the visitors win three rinks to one.

The first rink, skipped by Wendy Cross, saw the visitors trail 13-10 before eventually going down 19-15. Howard West saw his trio lead 13-7 before the home side hit back to level the scores at 16-16. With two ends left to play West’s rink pulled out all the stops to win 21-16.

SHIPLAKE tightened their grip on top spot in the Oddfellows Triples League on Sunday as they eased to a 101-46 home win against a struggling UNIVERSITY OF READING side.

The visitors, who had a shortage of players, had to concede one rink in a match that saw the home side secure all 14 league points.

The first triple skipped by Graham Kennedy raced into a 19-0 lead at the halfway stage before going on to win 33-6. Jim Bland’s trio led 11-0 before the visitors pulled the score back to 17-9. Bland’s rink then went on to secure the next 12 unanswered shots to win 29-9.

Wendy Cross saw her rink race into an 8-1 lead after five ends. The visitors hit back before Cross’s rink went on to win 21-16.