Shiplake have the edge in league and cup encounter 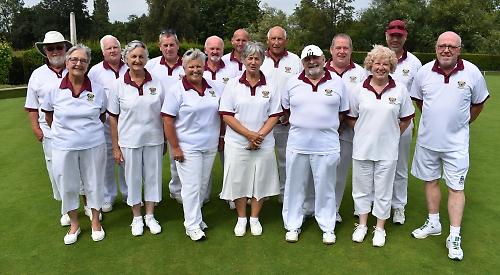 HENLEY won on three rinks as they triumphed in their home Oddfellows Triples League match with PALMER PARK on Wednesday of last week with the home side securing eight of the 14 points available.

The triple led by Barrie Davies experienced a close scoring game and although never headed, with each trio winning nine ends, they finished two shots ahead, 15-13.

Seven up after two ends settled Gill Robin’s triple and although their lead lessened around the halfway point they increased their advantage from the 12th end to secure a comfortable 19-9 win.

Skip Colin Ward’s triple found the going tough being 12 shots down after 10 ends, and scoring a six on the 17th was a big contribution to the deficit not increasing as they went down 25-13 while Peter Watkins’s triple were level at halfway but then lost three consecutive ends from which they did not recover to go down 21-13.

Winning only eight ends Dave Wilson’s triple led from the start with a 13-5 lead at halfway. Eight further shots from three winning ends against eight shots from six ends maintained their eight shot advantage to finish with a 21-13 win.

Last Saturday HENLEY lost out at HEADINGTON in a four mixed triples friendly match despite each side winning two rinks each as they went down 72-62.

Skip Gill Robins’s triple were 5-2 down after four ends, rallied with 11 shots on the next five ends to lead by 13-5 after nine ends and continued to increase their lead to finish 24-10 winners.

Colin Ward’s triple were nip and tuck to be 9-9 after 11 ends and in winning only two of the last seven ends slipped to lose out 21-12.

Being one shot up on the first end was the only time Andy Scott’s triple — with a Headington player loaned — were in the lead as they won only five more ends including the final one by three shots as they went down 27-9.

Sunday saw SHIPLAKE at HENLEY for the double header of five mixed triples in the Oddfellows Triples League and Plomer Cup with each club winning two rinks and one drawn but the visitors triumphed overall 90-79.

The result saw the visitors take seven and nine points to Henley’s five and five in the Plomer Cup and Oddfellows Triples League result respectively. Skip Peter Borsberry’s triple were 10-7 down after nine ends and thereafter it was all uphill, winning only one end by a single shot whilst conceding 17 to go down 27-8.

Skipped by Peter Watkins the triple reached halfway level 7-7 but then fell behind before a nail-biting last end scoring a five to reach parity at 17-17.

Colin Ward’s triple were seven shots up after six ends but losing the next six ends reversed the situation as they were then seven shots down but in the final third won all but one end to reduce the arrears to 17-12.

In a game of almost two halves the triple of Gill Robins took an early lead and after nine ends, having won seven, were 19-2 up. For the next seven ends, except for one which they lost by a single shot, the visitors eroded the deficit to be only three down with the final end to play which the hosts won by three shots to triumph 23-17.

The triple of Barrie Davies’ were one shot down at halfway before winning the next five ends to secure a lead of 13-6. Then their opponents scored two on the next end only for the home trio to add five shots on the 17th and to give four shots away on the last end resulting in a 19-12 win.

SHIPLAKE’S annual ladies versus gents match went ahead on Wednesday evening last week and consisted of one rink and two triples, all played over 16 ends. The men won on two of the three rinks to record a 61-25 victory.

The rink saw Elaine Robinson’s side take the early initiative but a close battle ensued that left the ladies with a one shot lead with just one end to play. Robinson managed to hold on, taking the last end for a single and with it, the spoils for the ladies 14-12..

The first of the two triples saw Jim Bland’s side take the early lead but they were kept to within two shots by the ladies after seven ends played. The gents then stepped up a gear and put together a strong run of four ends that put them well ahead. Despite a valiant response over the last five ends by Wendy Cross’s side, the gents comfortably held on for a 24-9 victory.

The gents second triple skipped by Dave Webb were in merciless form, leaving Jean Webb and her side without a shot until the 14th end. A single on the last could only double Webb’s tally, providing her side with scant consolation in a 25-2 defeat.

SHIPLAKE’S hopes of gaining promotion from Division 2 of the Oxfordshire League took a knock as they lost out 78-54 away to lowly CHADLINGTON on Thursday of last week. The visitors, who won on just one rink, picked up one point to the home side’s five.

Jim Bland saw his rink take the early lead and managed to hold a one shot lead until the 12th end when the home side drew level. Chadlington immediately went for longer jacks, taking two more ends to strengthen their position, until Shiplake regained the control of the mat and added two singles to come within one shot. The penultimate end saw two shots go to Chadlington giving them a three shot lead and another long jack saw the end of Shiplake’s challenge as they went down 19-11.

Graham Kennedy’s rink also began well and they were holding a three shot lead after 10 ends. Chadlington then gained control of the mat and despite the best efforts of Shiplake, found they were at the mercy of a skip who bowled straight into the head to come away with the shot or shots a further five times. This resulted in a four shot deficit that Kennedy could only narrow over the remaining two ends as his rink went down 15-13.

Dave Webb’s rink with Tony Reid got off to a flyer and barely gave Chadlington a look-in over the first 10 ends to build a 17 shot lead. The home side began to win a few ends but all for singles which left Shiplake 14 shots to the good. A seven went the homes side’s way but with just one end to play it had little bearing on the overall outcome as Shiplake ran out 23-12 winners.

Howard West’s side were up against a good side where Pete Christmas was the visitors’ standout player but the Shiplake rink lost out to their younger opponents 32-7.