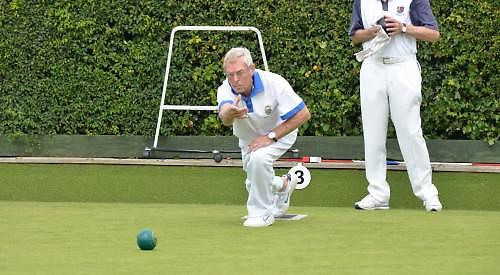 HENLEY lost out on Wednesday of last week in a five mixed triples friendly match against visitors HAGBOURNE by 105 shots to 68 having triumphed on one rink.

Skip David Burdon’s triple lost the first three ends to trail 9-0 but recovered from this setback and clawed their way back only to lose five ends in a row to lose 25-12.

The triple led by Peter Watkins suffered from not winning seven consecutive ends in the middle of the game as they lost 34-10.

Peter Borsberry triple had a comfortable win by 15 shots while allowing their opponents to win only five ends they triumphed 22-7.

To lose nine consecutive ends did not help Richard Kingston’s triple who went from 5-3 up after five ends to 22-5 down after 13 ends. Their continued resolve came good as they won four of the last five ends to finish 24-12 losers.

Skipping in a mixed match for the first time, Sally Daniells’ triple discovered their opponents found their line early on to race into a 21-6 lead before eventually winning 28-12.

Last Saturday HENLEY lost out 103-59 at DIDCOT in the return Plomer Cup match where the visitors won on one rink to secure two points.

The triple of Richard Kingston were in control until the 15th end when they dropped a six as the jack got moved. The next two ends were shared before their opponents claimed on the 18th end to triumph 22-13.

Skip Gill Robins’ triple were not helped by the conditions which their opponents coped with better to score steadily throughout the game, winning twice as many ends as Didcot triumphed 21-8.

Peter Borsberry’s triple held their own for two thirds of the game to be 12-11 ahead after 12 ends but allowed their opponents to win five of the last six ends to go down 23-13.

The triple led by Peter Watkins strove hard to keep their early lead with never more than two shots difference until the 13th end when their opponents scored three shots to lead by four shots. A riposte of seven shots on the next three ends ensued and restored a lead of four shots. Parity came again when they dropped a four on the penultimate end followed by a two shot win on the last end to win Henley’s only rink 18-16.

Another triple who found the going tough was that of skip Colin Ward who won seven ends, all by one shot, but losing the other 11 to go down 21-7.

HENLEY got back to winning ways in the Plomer Cup on Sunday as they defeated CAVERSHAM 83-76 having won on three of the five mixed triples to secure eight of the 12 points available.

Skip Frank Powell’s triple were always behind but despite a flurry of winning three sucessive ends could not make up the deficit as they went down 21-13.

Although losing the first two ends, Gill Robins’ triple won the next eight to have a 19-2 lead. The final eight ends did not continue as strongly as their opponents took six ends adding nine shots to their total while increasing their own score to run out Henley’s best winning rink of the day, 21-11.

The triple of Barrie Davies were always a shot or two behind but drew level on the 10th end, slipped to one or two behind again before drawing level only to lose the last end by one shot to go down 17-16. Will Girvan saw his triple go into the lead, lose it, gain it again only to be one shot down after 16 ends. However, a five and a one on the last two ends saw Henley record an 18-13 win.

Never once headed until the 16th end Peter Borsberry’s triple managed to win this close game by scoring two shots on the last end triumphed by one shot, 15-14.

SHIPLAKE shared the points in their Plomer Cup match at WATLINGTON on Wednesday of last week.

The home side won by three rinks to two but the visitors had a better shot advantage, 101-83, as both sides secured six league points.

Tony Reid’s rink stormed into a 9-1 lead after four ends before going on to win 31-9 while Dave Webb’s trio controlled their match from start to finish to win 22-13.

Wendy Cross saw her triple fade early on before edging ahead 7-6. Watlington drew level at 9-9 before pulling away to win 19-15.

Jim Bland’s rink led 13-8 before slipping behind and eventually losing by one shot, 19-18 while Graham Kennedy’s rink were 14-2 down early on before eventually going on to lose 23-15.

SHIPLAKE finished their Oxfordshire League Division 3 campaign with a 68-39 home win against bottom of the table HANBOROUGH on Thursday of last week. The result gave Shiplake five league points to the visitors’ one and secured them third place in the table.

Dave Webb’s rink struggled to make any inroads early on and it wasn’t until the fifth end that they gained their first shot. Hanborough continued to keep a two or three shot lead for a time but by the 14th end Shiplake got to within one shot but eventually went down 14-10.

Jim Bland’s rink put together a strong run of five ends to take an eight shot lead early on before going on to win 16-9 while Barry Lambourne’s rink started slowly before pulling away to win 27-7.

Graham Kennedy’s rink had the better starts of all the Shiplake matches but they were then pegged back to within just one shot by the 10th end. The 11th end saw Shiplake bag four shots which set them back on their way as they went on to win 15-9.

SHIPLAKE came away with all 12 points in their Plomer Cup encounter at GORING HEATH (ALMSHOUSES) on Saturday as they triumphed 59-39 having won on all three rinks.

Howard West’s rink got off to a good start as they led 10-0 after four ends. The visitors reduced this to 15-7 after 12 ends before going on to snatch a 19-16 victory.

Dave Webb’s rink edged into a 12-6 lead and never looked back as they ran out 21-17 winners while Wendy Cross’s rink raced into a 10-2 lead after six ends before eventually winning 22-12.

Sylvia Blackmore saw her rink trail 14-7 and despite narrowing the gap, eventually lost out 19-14 while Graham Kennedy’s rink trailed 15-0 before finally losing 26-14. The final rink, skipped by David Bullock, were level at 11-11 at one point before losing 17-11.