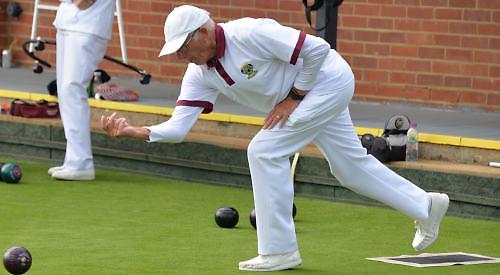 HENLEY lost out in their four rinks men’s triples friendly at WOODLEY on Tuesday of last week, going down 80-58 in a match that saw the visitors win on just one rink.

Frank Powell’s triple took half the game before going 9-6 into the lead and then took command, winning seven of the last nine ends before dropping six shots on the last end to win 19-14.

The triple of Rod Grant could only watch as their opponents’ skip made certain his triple won end after end by scoring 21 shots without reply after 10 ends. The spell was broken on the next end and six more ends were won by Grant’s trio but one of their losing two was by six as they went down 28-8.

HENLEY’S Oddfellows Triples League match against READING UNIVERSITY on Wednesday of last week was rained off with another date yet to be finalised.

In the same competition on Saturday, a three mixed rinks HENLEY team lost a low scoring match at GORING, going down 52-41 to secure just three of the 14 points on offer.

Skip Dave Wilson’s triple found the going less than easy from the start and were always trailing and, of the nine ends they won, eight were by one shot with the other by two shots. Goring won four of their 12 ends by two shots and the other eight ends by one to win 16-10.

Gill Robins’ triple had a close game being in the lead on four occasions, level three times and behind twice. After the penultimate end they led by three shots but lost the last end by two to win 19-18.

The triple led by Colin Ward went behind at the fourth end and whilst winning four ends by one shot over the next 13 ends were 10 shots in arrears. A fight back over the last four ends with five shots to one in their favour brought the end score to an 18-12 defeat.

SHIPLAKE ran out 65-34 winners away at WOODLEY in a friendly fixture on Wednesday of last week in a match that saw the visitors win on four of the five rinks played.

The first rink, skipped by Mike Lovejoy, got off to an even start with the scores 3-3 after six ends before the visitors pulled away to win 9-5. Graham Kennedy’s triple were level at 5-5 after five ends before scoring a four on the ninth to pull away to win 14-9 while Jim Bland’s rink fought back from 5-4 down to win 18-5.

Wendy Cross’s rink ran out 17-5 winners while Tony Reid saw his trio take a 5-3 lead before going behind and eventually losing 10-7.

SHIPLAKE crashed out of the Oxfordshire League Cup at the quarter-finals stage on Thursday of last week as they went down to a 77-46 defeat at home to Division 1 side WITNEY MILLS.

Jim Bland’s rink struggled to contain their opponents early on but made up some ground to come within four shots after 11 ends but the final run in saw Witney Mills close the match out to win 21-8.

Graham Kennedy’s rink took the early lead after five ends but a run of six ends for Witney Mills saw them take an eight shot lead. Shiplake fought back taking five of the remaining seven ends but couldn’t quite make up enough ground as they went down 17-12.

Rob Webb found his side seven shots down after nine ends before going on a good run to put Shiplake one shot in the lead with two ends to play. However, Witney Mills managed to stifle Webb’s momentum, first gaining three shots before finishing with a further two to win 19-15.

After dropping the first two ends, Matt Shepherd started to get the best out of his side to dominate and build a five shot lead by the halfway mark. However, the second half saw Witney Mills take control and restricted Shiplake to just two singles as they won 20-11.

SHIPLAKE’S Oddfellows Triples League title hopes took a knock on Saturday as they went down to a 83-58 defeat at PALMER PARK. The visitors, who won one, drew one and lost three rinks picked up three points to the home side’s 11.

The first rink, skipped by David Bullock were five shots behind after five ends before going down 15-12 while Mike Lovejoy’s rink raced into a 6-0 lead before going on to win 20-13.

Wendy Cross saw her rink trail 12-2 after six ends before eventually going down 25-5 while Sylvia Blackmore’s triple were level at 6-6 before going on to lose 18-9.

Graham Kennedy’s rink were 5-0 down before they edged ahead 6-5. The Shiplake trio went behind once again to trail 11-9 before hitting back to draw 12-12.

SHIPLAKE ran out 81-69 winners in a five rinks friendly triples match with TILEHURST at their Memorial Avenue ground on Sunday. The home side won on three rinks and drew and lost the remaining two.

John Gutteridge’s rink stormed into an 11-2 lead before going on to win 21-12 while David Bullock’s rink were all square at 6-6 after eight ends before eventually drawing 13-13.

Wendy Cross guided her rink to an 8-5 lead after eight ends before going on to win 15-13 while Howard West saw his rink trail 19-6 at the halfway mark before fighting back valiantly but eventually losing out 21-17. Elaine Robinson saw her rink lead all match before eventually running out 15-10 winners.