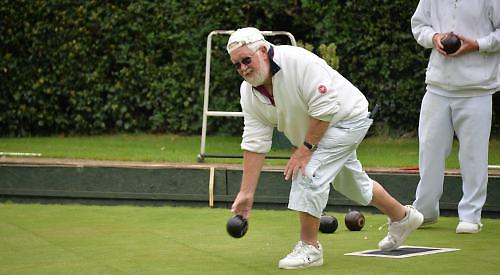 HENLEY lost out to GORING HEATH in the Plomer Cup in their midweek fixture.

They went down 60-65 shots and won one rink to secure three points.

Skipper Colin Ward and his three fellow players went 10 shots down at one stage but rallied to at best five down but lost the last end to finish 21-28.

Gill Robins' four were trailing and at ten ends were six shots down but won all bar one of the remaining ends to win 18-13.

The four led by Peter Watkins were 11 shots to the good after 10 ends but one win in the next five ends and one from the last six ended in a 21-24 defeat.

HENLEY recorded a 79-77 shot win against UNIVERSITY OF READING in the midweek Oddfellows Triples League match.

They had also secured three rinks to Reading’s two and claimed 10 points to their four.

Barrie Davies’ triple were trailing from the start but drew level at 10-10 after 10 ends. They moved into the lead but dropped three shots on the 16th but won the last two ends to win 16-15.

Skipper Peter Borsberry’s triple started strongly but were 12-12 after 10 ends. But the Henley trio won the last third of the game to give a 20-18 win. The triple of Colin Ward won one end fewer than their opponents and lost out 9-13 in a low-scoring game.

Gill Robins’ triple started promisingly but after 13 ends were 6-12 down. They gradually reduced the deficit, winning the next four ends, and two more shots on the last end secured a 16-12 win.

The triple skippered by Dave Wilson scored seven shots on end four to go 9-1 only for their opponents to respond with a five on the next end.

After going 10-10, the lead changed hands four times only for the opposition to score a three shot win on the penultimate end to lead by two shots. Although the Henley trio won the last end the single shot was not enough and so they lost 18-19.

SHIPLAKE secured a 90-72 shot win against BURGHFIELD in their Oddfellows Triples League clash.

The hosts also picked up three of the five rinks to the visitors’ two.

Shiplake’s Clare Gutteridge, Pete Christmas and Graham Kennedy had an awful start, going 6-12 down after seven ends. But the tide turned as the hosts racked up a steady shot count to win 23-13.

David Lloyd, Sylvia Blackmore and Mike Lovejoy were 7-0 down after three ends but then steadied the ship and by the 16th end, they were 18-12 in front.

Burghfield hit back with a three to make a nervy finish but the hosts held on to win 19-15.

Jackie Stafford, Mark Belcher and Matt Shepherd were chasing for most of the game, going behind 6-14 after eight ends.

With the green posing problems for both sides with lines proving unpredictable, Shiplake brought it back to within two shots with one end to play. The hosts won it, but with a single, so lost out 19-20.

Sue Reid, John Gutteridge and Wendy Cross took the early lead and by the eighth end were 10-3 in front.

But Burghfield then notched five ends without reply and levelled the score. Shiplake responded by winning the next five ends to take the game 16-10.

Francis Benham, Elaine Robinson and Tony Reid went into a 4-0 lead but then stalled — first drawing 5-5 then going nip and tuck before falling 12-14 behind.

A single on the last was not enough as Shiplake slipped to a 13-14 defeat.

Meanwhile, SHIPLAKE lost out 56-89 shots to READING, picking up one rink to their opponents’ four in a friendly triples match.