Henley bowlers back on green after restrictions eased 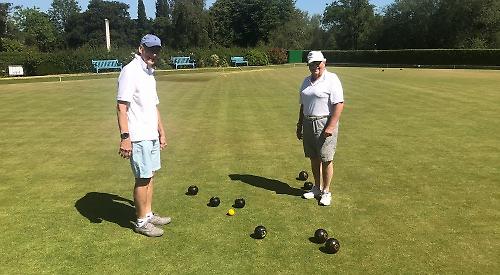 MEMBERS of Henley Bowls Club were back on the green after sporting restrictions introduced in response to the coronavirus pandemic were eased.

The club had continued to maintain the green during lockdown, which was introduced in March and brought all sporting activity to a halt.

Then in mid-May it was announced that bowling greens were allowed to re-open with strict guidelines in place to maintain social distancing.

Kevin Browne, membership secretary of the club, which is based at the Leichlingen Pavilion in Mill Meadows, said: “We received word from Bowls England via our Oxfordshire Bowling Association that the Department for Culture, Media and Sport would allow bowling greens to re-open.

“We were advised to wait for more detailed guidance from Bowls England which came through two days later and clarified some of the detail not specifically referred to.

“The club’s committee quickly approved a detailed set of rules for its members and on Saturday, May 23, some eager bowlers got back on the rinks.

“Although, as luck would have it, two unlucky members got pretty damp when there was a small squall over Henley that morning.”

To accommodate the social distancing requirements laid down by the Government the club has followed Bowls England guidance and set up a booking system, which allows up to nine games a day to take place.

Each game has been scheduled to start 20 minutes apart so that players can arrive and leave the club safely.

Only three rinks are open at a time so that alternate rinks are used. This means there is always an empty rink between players.

The club is only allowing a maximum of two players per rink and has banned all spectators.

The clubhouse is open but only to allow access to the green and for players to use the toilets. The changing rooms, bar and kitchen remain closed. Hand sanitiser has been made available and all equipment and bowls are cleaned before and after use.

Social distancing rules are strictly adhered to with members keeping at least 2m apart from other members, except when the members are part of the same household.

Browne says the club’s restrictions allow one-to-one tuition to be re-introduced so those interested in giving bowling a try can now do so.

For more information or to arrange a taster session, visit www.henleybowlingclub.wixsite.
com/home