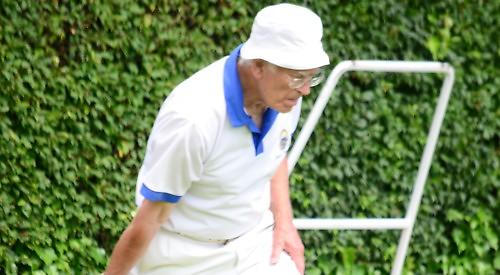 HENLEY ran out winners in their combined four triples Oddfellows Triples League and Plomer Cup match at SHIPLAKE on Wednesday of last week.

The visitors triumphed overall 81-63 in close encounter that saw Henley win on one rink, drew on one and lose on two.

Dave Wilson, with Steve Sullivan and Jeanie Davies, stormed to an emphatic 31-9 win while Angie Isaac, with Norman Daniells and Andy Scott, were leading 15-8 after 14 ends, but dropped seven shots over the final ends to draw 15-15.

Gill Robins, with Barrie Davies and Joan Edwards, were 7-7 after eight ends, fell away to six down after 12 ends, then fought back, but went down 20-19. Simon Hatcher, with Peter Borsberry and Angelika Crisa, were evenly matched with the score 16-16 after 17 ends only to drop three on the last end to go down 119-16.

Barrie Davies, with James Turner and Martin Taylor, both new to the club and Martin new to bowling, ran out comfortable 21-15 winners. David Burdon, with Maurice Robins and John Wilkinson, another new member, were four down after nine ends, then picked up a five on end 10, and level 14-14 after 17 ends, only drop one, to go down 15-14.

Peter Borsberry, with Rod Grant and Jim Walter, another new member, were 9-9 after nine ends before going down 18-15.

Joan Edwards, skipping in her first mixed representative match, with Kevin Browne and Richard Kingston, were eight up after five ends and 12-12 after 14 ends, only to go down 17-13.