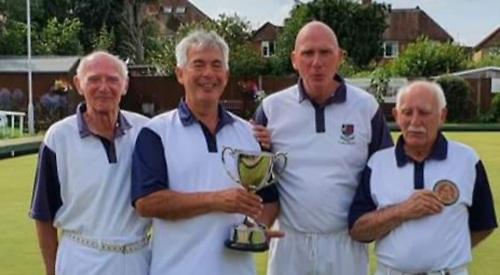 CAVERSHAM have been crowned county champions after winning the Berkshire Senior Fours at Tilehurst, where they defeated WINDSOR 16-9 in the final.

The team of Alan Brooks , Harry Walmsley, Peter Slatford and Stephen Hall will now represent Berkshire at Leamington in the national finals later this month.

HENLEY went down to a 77-59 defeat at HAGBOURNE on Wednesday of last week in a four rinks mixed friendly where the visitors triumphed on two rinks.

Gill Robins, with Andy Scott and John Cross, were leading by six after five ends, down by one after seven ends, then pulled away to win 23-12.

Colin Ward, with Peter Watkins and Romy Painter, were six up after eight ends but fell away, going down 28-12.

Barrie Davies, with Angelika Crisa and Martin Taylor, were neck and neck throughout the match but just edged it to win 15-14 while Peter Borsberr,y with Jeanie Davies and Maurice Robins, struggled from the start, pulled back after 11 ends, before losing 23-9.

On Saturday HENLEY ran out 83-52 winners in their home four mixed triples Plomer Cup match with DIDCOT to secure 12 points.

David Burdon, with Andy Scott and Jo Wilson, dropped seven shots on end three, were level 8-8l after end six, then pulled away to win 26-16.

Dave Wilson, with Jeanie Davies and John Wilkinso,n were 8-8 after 10 ends, just one up after 17 ends, then picked up two to win 16-13. Barrie Davies, with Peter Borsberry and Angelika Crisa, were leading from the start, before running out 21-13 winners.

HENLEY picked up another Plomer Cup win on Sunday when they defeated hosts CAVERSHAM 73-72 to gain seven points to the home side’s five.

Barrie Davies, with Simon Hatcher and Jo Wilson, were one down after 11 ends having just dropped four shots, picking up five on the next end to run out 19-14 winners.

Dave Wilson, with Andy Scott and Angelika Crisa, were five up after seven ends, pegged back to two up after 14 ends, dropping eight over the next three ends, then picking up four on end 18 to lose 21-19.

Peter Borsberry, with Jeanie Davies and Maurice Robins, struggled up to end 11, then found the green to pick up 12 over the next five ends but couldn’t keep their momentum to go down 22-15.

Gill Robins, with Kevin Browne and Richard Kingston, raced into an eight shot lead after nine ends, were pegged back to lead by one after 12 ends then ran out 20-15 winners.