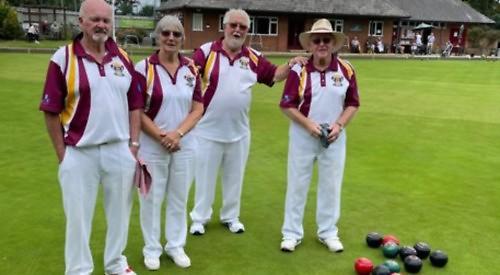 HENLEY ran out winners of the Oddfellows Triples League for the first time in 30 years despite drawing their final match with HURST.

In last Saturday’s home clash Henley won on two rinks, drew one and lost two as the game ended 83-83 with both sides securing seven league points each.

By the penultimate 17th end, Henley had an overall lead of eight shots on all five rinks but dropped shots on every one in the last end.

Norman Daniells, with Joan Edwards and Peter Watkins, picked up a seven on end two and raced to a 16 shot lead after six ends, eventually running out
20-11 winners.

Gill Robins, with Nigel Bridges and Keith Lawrance, were six down after eight ends, level after 10 ends, then winning 20-13. Dave Wilson, with Andy Scott and Angelika Crisa, were level after six ends, five down after 15 ends before finishing 16-16.

On Wednesday of last week HENLEY ran out 83-54 against visitors HAGBOURNE in a four mixed friendly match. Gill Robins, with Kevin Browne and Keith Lawrance, raced to an early lead, winning 27-7. Colin Ward, with Joan Edwards and Brian Duddy, were seven up after seven ends, pegged back to one up after 11 ends, then pulled away to win 21-15.

On Sunday HENLEY went down to a 99-72 defeat in a five mixed friendly match at THREE MILE CROSS. Peter Borsberry, with Nigel bridges and Angelika Crisa, had a closely fought match, l3-13 after 17 ends, only to drop three on the final end to go down 16-13.

Jeanie Davies, with Richard Kingston and John Wilkinson, were two up after eight ends, but fell away to go down 23-17. Andy Scott, with Joan Edwards and Maurice Hill, were five up after nine ends, but struggled over the next nine ends to go down 21-14.

Gill Robins, with Jim Turner and John Cross, started slowly, 12-12 after 13 ends,before losing 18-12. David Burdon, with Maurice Robins and Angelika Crisa, struggled up to end 14, then picked up nine over the next four ends to finish 21-16 losers.

The winners will all be presented with their trophies at a presentations evening in November.

For more information and to join visit www.bowlsshiplake.com