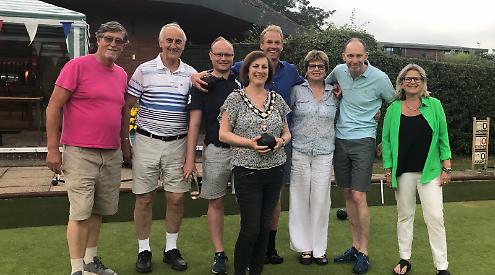 HENLEY narrowly won their friendly match at home against TRENTHAM on Wednesday on last week by 63 shots to 62.

The five mixed triples match was reduced to 16 ends due to heavy rain with Henley winning on four of the rinks.

Simon Hatcher, with David Burdon and John Wilkinson, scored steadily, nine up after nine ends and ran out 19-7 winners. Andy Scott, with Richard Kingston and Ramsay Adams, were seven up after 11 ends, dropped five on the next three, before winning 12-8.

Steve Sullivan, with Sally Daniells and Maurice Robins, came up against a strong triple and went down 25-4.

Norman Daniells, with Colin Ward and Martin Taylor, were two down after nine ends, level 11-11 after 14 but picked up four to win 15-11.

Peter Borsberry, with Romy Painter and Brian Duddy, struggled from the start, were six down after 12 ends, then found the green picking up eight over the final four ends, four on the last end to win 13-11.

HENLEY made it back-to-back wins on Saturday as they beat visitors WARGRAVE in mixed triples friendly by 95 shots to 43 having won on all four rinks.

Joan Edwards, skipping for the first time this season, with Steve Sullivan and Jim Turner, were never behind and ran out 30-10 winners while Barrie Davies, with Martin Taylor and Keith Lawrance, were one down after two ends, nine up after 13 ends, then scored 12 on the final ends to win 27-6. Kevin Currill, skipping for the first time for the club, with Sally Daniells and Peter Falle, were four down after 12 ends, picked up four to draw level, then ran out 17-14 winners. Peter Borsberry, with Andy Scott and Jenny Wingrove, in her first representative match this season, and shared with Peter Watkins, were eight up after eight ends, dropped a four on the next end, before Watkins played in Wingrove’s place for the team to win 21-13.

Between the two matches, on Thursday evening, HENLEY welcomed the town’s mayor and a number of the town councillors for a social evening of bowling followed by a fish and chip supper.

On Wednesday of last week 16 members of SHIPLAKE held a killer bowls event with the in-form Pete McCoubrey taking the honours. On Saturday SHIPLAKE lost out at home to DIDCOT in a Plomer Cup match by 78 shots to 55 despite winning on two of the four rinks.

SHIPLAKE reversed their fortunes on Sunday when they visited GORING AND ALMSHOUSES, winning 64-38 in a three-rink Oddfellows triples match.

Marilyn and Laurie Mowatt, playing their first match for Shiplake, both helped their respective teams to a win. Marilyn with Pete Leverett and Wendy Cross won 22-13. This was a close game until Shiplake scored five on the 15th end to eventually pull away. Laurie, with Jean Buckett and Sylvia Blackmore ,had a convincing 30-5 win.