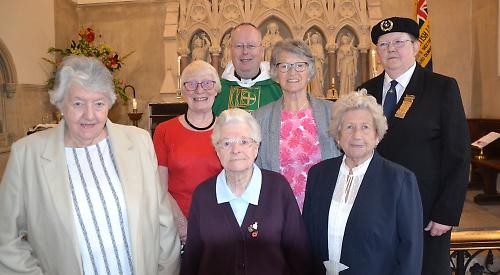 A CHURCH service was held to mark the closure of the Royal British Legion’s Shiplake and Dunsden women’s section.

About a dozen former members were among those who attended the event at All Saints’ Church in Dunsden.

They included Margaret Harris, a branch founder and the outgoing chairman who had held the post for 15 years.

The ceremony was conducted by Rev Robert Thewsey, the village rector, while Diane Riley carried the standard for the last time into the church and laid it up beside the altar. She had been the standard bearer for the women’s section for more than 30 years.

The branch standard will be placed on the wall close to the Wilfred Owen commemoration plaque.

The branch, which was formed in 1945, closed in 2017 after the Legion announced it was amalgamating all branches into mixed-sex branches to save money.