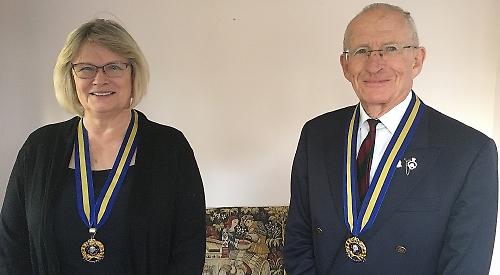 THIS year’s Henley Poppy Appeal will be launched at a low-key, socially distanced ceremony in Market Place at 11am on Saturday.

Councillor Arlett will pick up the poppy from a table instead of having it handed to him. Members of the public will then be able to buy poppies.

The event will be smaller than in previous years, when the branch has organised performances by singers and ukulele players, although Mr Green will be dressed as a First World War soldier as usual.

This year the Legion’s volunteers can’t collect door-to-door because of the danger of coronavirus but they hope to make up for it by placing more poppy trays in shops and other public spaces.

Mr Green said: “There’s still a lot of confusion around what we’re doing and we want people to know that poppies are still available, so they should make every effort to visit their local shops.”

Meanwhile, the Remembrance Sunday parade and service in Caversham has been cancelled because of the pandemic.

Poppy Appeal organiser Pauline Palmer said the occasion usually attracted more than 1,000 people so had fallen victim to its popularity.

She said: “The reason is that because of the numbers that would probably have wanted to attend this year, and based on previous occasions, there is no way I could complete a risk assessment.

“The police and council have been consulted and they support us completely.

“One of the reasons we could not even have the service is that it is held in the open and, while we might have had some chance of controlling the numbers by giving out personal invitations to attend, the general public could easily assemble as the memorial is on public land and the numbers and social distancing would be impossible to control.

“We have invited any group that has, in the past, or this year wants to lay a wreath on the memorial to do so between November 1 and 8 at a time that suits them.”

Mrs Palmer said it was hoped to make up for the cancellation by marking the 100th anniversary of the Royal British Legion properly next year.

Special arrangements have been made for Remembrance Sunday in Shiplake and Dunsden to ensure covid-19 guidelines are observed.

There will be no service at All Saints’ Church in Dunsden but there will be a short wreath-laying ceremony at the war memorial in Dunsden Green at 10.15am.

A service will take place at St Peter and St Paul’s Church in Shiplake at 10.50am.

There will be a wreath-laying ceremony at Shiplake Memorial Cross at noon.