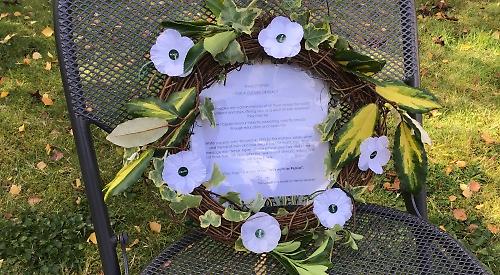 WHITE poppy wreaths have been made by the Henley Quakers.

They are being displayed by churches in the Churches Together group.

This was founded in 1995 and consists of Christ Church United Reform Church, St Mary the Virgin and Sacred Heart, all in Henley, St Nicholas, Remenham, St Margaret, Harpsden, St Peter and St Paul’s, Shiplake, and All Saints, Dunsden.

White poppies are worn in honour of people across the world who suffered or are suffering as a result of war.

They also support work for peace through education and mediation.

White poppies were first worn in 1933 by the mothers, sisters, wives and friends of men who had died in the First World War.

Their message was “never again”. Yet more than 100 years after the “war to end all wars”, millions of people still dying in conflicts.

Over the past few years Henley Quakers have been giving away white poppies for peace, both at the Meeting House in Northfield End and from a stall in Falaise Square on one Sunday in October. This year, they are unable to do this this because of coronavirusrestrictions. As well as at the churches, the wreaths can be seen at the Meeting House and at the Peace Tree in Mill Meadows, Henley.