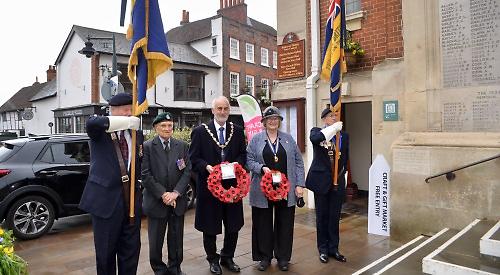 A SPECIAL service was held at St Mary’s Church in Henley on Saturday to mark the 100th anniversary of the Royal British Legion.

The holy eucharist, which was conducted by Rev Jeremy Tayler, featured hymns and bible readings, but only a soloist was allowed to sing.

The four standards were presented to Rev Tayler, rector of St Mary’s Church, and placed into stands for the duration of the service.

Lt Col Peter Blaker, a former president of the local branch, read the Royal British Legion Exhortation and Col Launders gave a reading from the book of James.

He was followed by Anne Evans, the chair of the Henley and Peppard branch, who read the Responsorial Psalm and then Mr Green gave thanks to God for the continued success of the Royal British Legion.

The service followed a wreath laying ceremony on the steps of the town hall at 9am. Mrs Evans, who lives in Wilson Avenue, Henley, put down the first wreath, which was made entirely of plastic poppies, followed by Councillor Arlett.

Mr Green and Col Launders attended with the Henley and Peppard standards, along with Lt Col Blaker, who lives in Rotherfield Greys.