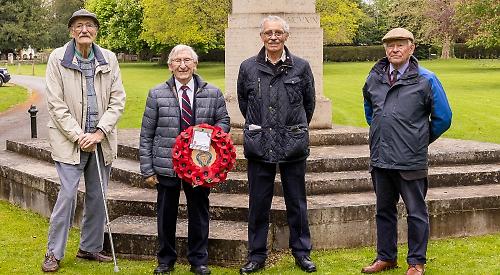 A WREATH-LAYING ceremony was held in Wargrave to mark the centenary of the Royal British Legion.

About 20 people, including members of the local branch of the Legion, gathered at the war memorial on Mill Green.

Everyone present observed a minute’s silence at 11am.

Among the Legion members in attendance was 96-year-old John Fryer, Wargrave’s only surviving veteran of the Second World War.

Mr Fryer, who lives in the Walled Garden and is a parish councillor, joined the Rifle Brigade when he was 18.

The memorial features the names of the 69 men and women from Wargrave who died while serving during the First or Second World Wars.

The Wargrave branch, which has about 130 members, is hoping for a better year of fundraising after many of the planned activities last year had to be cancelled because of the coronavirus pandemic. The Poppy Appeal would normally raise around £13,000 a year but last year door-to-door collections were not allowed due to government restrictions. Instead an online fundraising page was set up and raised £6,000.

Mr Smith, a retired Royal Air Force wing commander, said there was still some doubt over whether collections could be carried out as normal later this year.

He said: “If we can have our regular poppy collection later in the year it should be an improvement but we will have to wait and see.

“Last year was a bit of a washout because we were unable to do our traditional events. We did reasonably well given the circumstances.”

Mr Smith said that door-to-door collections had become more difficult in recent years because people were less likely to have cash on them with the growth of contactless payments.

The branch has more than 100 collectors during the Poppy Appeal in November but it would be impractical for them all to carry machines for contactless payment.

Mr Smith added: “We are also finding that some of our older collectors are less willing to go out knocking on doors.

“Normally at this time of the year we have planned lots of fundraising events but because of restrictions and social distancing these have been put in abeyance.

“We are waiting until we can start going out again but some people have already expressed that they are a little bit nervous to go out and not sure it is safe yet, so it will have to be with a degree of caution.”

Mr Smith said it was gratifying to know children in Wargrave had an appreciation for the work of the Royal British Legion and those who died serving their country.

“There is such a strong connection between the Legion and the schools,” he said.

“Each Remembrance week, a member of our branch will go into the Piggott School and take an assembly. The children always engage with it and it is so nice to know they care and that the message is getting across.

“I think a lot of that connection came from when Tony was our chairman. He was also the chairman of governors at the school and did a lot of work to strengthen that relationship.”