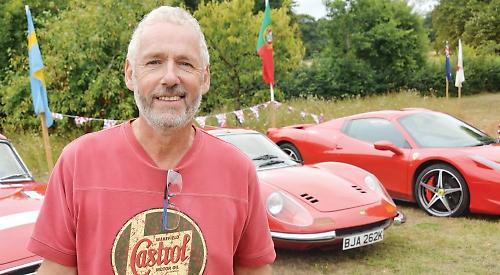 A CLASSIC and sports car run from Britwell Salome raised £5,200 for three charities.

Villager Chris Bidgood welcomed almost 40 vehicles to his home in the village for the sixth biennial Britwell Salome Classic and Interesting Vehicle Run.

Mr Bidgood signposted the event with a flagpole bearing a chequered flag at the foot of Britwell Hill. He decorated the entry gate to his house in the style of a racing finish lane and had installed a speed detector in the approach lane with a screen that told approaching drivers how fast they were going.

With the help of friends he also decorated his garage in the style of an old-fashioned garage with hand-painted versions of old signs and a pretend BP petrol pump.

The convoy, which included Ferrari, Porsche and Lotus cars, as well as an Aston Martin DB4 and a Jowett Javelin, took a route through Roke, Chalgrove, the Haseleys, Milton Common, Wheatley and Thame and near Princes Risborough.

Here they stopped at a friend of Mr Bidgood’s to see his collection of cars before returning to Britwell Salome.

Mr Bidgood, who drove his Ferrari 355 on the run, said the day raised £2,700 with Santander donating £2,500. The money will be split between Rennie Grove Hospice Care, which cared for his late mother-in-law Rita Draper, the Cystic Fibrosis Trust which Mr Bidgood said he wanted to support as a family in the village have two children who suffer from the condition, and Daisy’s Dream, whose director Gill Stevens lives in the village.

Mr Bidgood said: “It’s a run that people seem to love. From my point of view it was fabulous because we raised the highest amount of money we have every achieved. I had a target of £5,000 having raised £4,500 last time.

“It gives me a chance to keep in touch with a lot of friends and it’s lovely to give something back to the local community. We have a lovely garden here and it gives us a chance to use it for the benefit of others. I do get a buzz out of seeing friends enjoying themselves and enhancing the countryside with some nostalgic views of old cars you don’t really see that often. We have probably raised altogether about £20,000 over the years.”

A ‘guess the value of all the cars’ game was won by Hilly Harris, from Christmas Common, who guessed £1.45million, with the actual value £1.458million. Dominic Taylor-Lane, from Ewelme, had his Alvis Drophead voted best car of the day by visitors.

Mr Bidgood thanked his friends Leigh Greenham, Trevor Hughes, Doug Harris and Geoff Whittaker and his family, who helped set up and clear away after the fund-raiser.