Couple leave pub after four years and business is sold 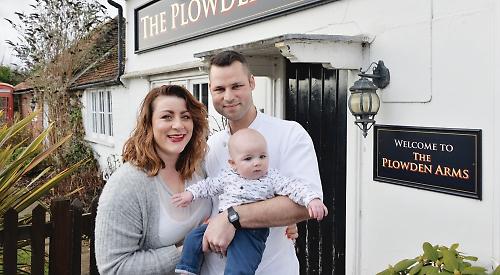 THE landlords of a popular village pub say they are leaving as they have achieved what they wanted.

Matt and Ruth Woodley will leave the Plowden Arms in Shiplake on March 31 after more than four years in charge.

The couple held their wedding reception at the pub in 2014 and now have a four-month-old son, Arthur.

The pub has been sold, subject to contract, by Brakspear and will continue to be run as a pub.

Mr Woodley, 34, plans to focus on home cooking and catering tuition while his wife will look after Arthur.

Mrs Woodley, 33, said: “We achieved our goals at the Plowden a couple of years ago and, with little opportunity to develop further, it’s only natural to want to move on and achieve new goals in new ventures.

“Right now, my focus has to be on Arthur. However, I’m also currently looking at a couple of properties for a new food-based business.

“Matt’s working on a few personal projects, including offering to share the skills and knowledge he has gained through working as a chef for more than 20 years in the form of home tuition and catering.”

The couple, who live in Caversham, say they will miss their pub regulars.

Mrs Woodley said: “We’ve been blessed to have a really loyal following. To them we owe the success and happiness we’ve had.

“Hopefully, both Matt and I will have the opportunity to welcome them all to our new ventures in the not too distant future.

“As anyone in the trade knows, pubs are a 24/7 commitment so there’s plenty of opportunity to make memories.

“My absolute favourite has to be celebrating our marriage in the garden at the pub alongside 200 friends, family members and villagers.” The couple’s last night of normal trading will be on March 31 but there will also be an invitation-only party, where guests are invited to pay what they think their meal is worth.

Before then the pub will run themed events for Valentine’s Day and Mothering Sunday.

Mrs Woodley added: “It’s a tough trade, staffing is hard, margins are tight, trade is unpredictable and people’s expectations of pubs vary from everything from the traditional boozer to a Michelin-starred eatery and the entire spectrum in between!

“But it can also be the most social, energised and rewarding trade to work in.”

The pub’s freehold was marketed by estate agents Fleurets for £450,000. The advertisement said the price did not include the former function room, adjacent gardens and part of the car park and said the site had “alternate use potential”. This led to speculation locally that the site could be redeveloped for housing.

But Brakspear chief executive Tom Davies said this week that the whole site had been sold to another pub operator.

He said: “We are pleased to announce that we have agreed terms for the sale of the entire site of the Plowden Arms.

“As far as we are aware, the purchasers want to run the pub as a freehouse in a similar vein to the way it currently operates.

“We are aiming to complete at the beginning of April so there can be a smooth transition from Ruth and Matt to the new owners.

“I would like to take this opportunity to thank Ruth and Matt for the hard work they have put into the Plowden Arms over the past four-and-a-half years, making it the place it is today.”

Meanwhile, Brakspear has appealed against a decision to refuse planning permission for two houses on land at the former Dog and Duck pub in Highmoor.

The company applied to South Oxfordshire District Council for consent for three-bedroom house and a four-bedroom house on rough land south of the pub, which closed in December 2011.

In October, the council refused permission, saying the development would be environmentally unsustainable and would urbanise the adjacent countryside.

It says: “At the pre-application advice stage, the case officer acknowledged that ‘Highmoor is a sufficiently sustainable location to derive economic and social benefits from an increase in population’.

“The officer failed to acknowledge, consider or attribute any weight to this in the planning balancing exercise set out in his report.

“However, sufficient evidence has been presented by the appellant that demonstrates the proposal to be sustainable in terms of location, economic, social and environmental.”

The company already has permission to demolish the pub building and erect two houses.

In March 2012, Brakspear said the pub was “unviable” and offered the freehold for sale for £495,000 plus VAT but no buyers came forward.