Let's get down to business - Joan Bland 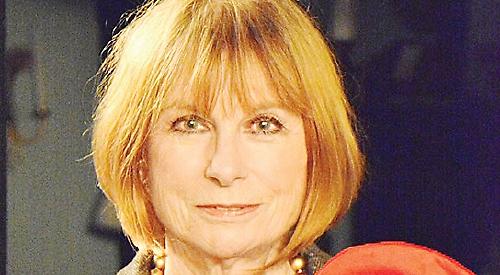 JOAN BLAND is the proprietor of Asquiths Teddy Bear Shop in New Street, Henley, and she and her husband Ian Wainwright, a photographer and designer, have lived in the town for more than 30 years. The shop moved to its current location from Friday Street in 1991. A year later, Joan was presented with the Women in Business Award by John Major. She represents Henley as a Conservative on South Oxfordshire District Council and is also a keen rower. By coincidence, she was born and raised in Paddington.

Asquiths is unique in making and selling teddy bears and related products. It was the first teddy bear shop in the UK and is now world famous. We also stock famous brands such as Steiff, Hermann and Charlie.

Three in the shop. Our bears are made in Yorkshire, where many skilled craftspeople and sewers live.

What did you do before this?

Lots! I started as a make-up artist at BBC’s studios in Ealing but wanted to travel, so after four years I went to Australia, doing the same job for the Australian Broadcasting Association. I then spent several years in the Caribbean. I did the make-up for a production The Beggar’s Opera in Georgetown, Guyana, which was rewritten as if it was happening locally, so I made up the beggars to look like lepers. Some members of the audience left as they thought the actors had come from Mahaica where some actual lepers lived! I went to Trinidad, where my sister was living, to get married. My husband got on with her husband and they worked together. However, my husband and I parted and in 1970 I came back to the UK with my two-year-old daughter totally penniless. I lived with my parents in Old Windsor. Being desperate to earn money and in need of a car, I went into a Brook Street Bureau and was offered an interview with a company that sold gifts. Fortunately, I got the job, which came with a car, and was good at sales.

How did you first go into business?

I sold business promotional gifts, partnering Ian, who later became my husband. We made gifts for Playboy and John Player cigarettes, among others. The business was growing fast and we desperately needed cash flow, so I suggested we went into retail. I found a little shop and by noon the same day I’d negotiated to buy the lease. I was always looking for the ideal product, one that was classic and not seasonal. People kept coming in asking for pottery teddy bears that the previous owner had sold and the seed was sown. Teddy bears it was. Most of the English manufacturers had closed down due to cheap imports, so I imported traditional teddy bears from Germany. However, I needed English products and, as I had always made my own clothes out of necessity, I made our first teddy bears.

To be in charge of my own destiny.

Did you have a mentor or role model?

No, but my boss at the gift company showed me great generosity at a difficult time in my life and over the years I’ve been able to return his kindness.

What would you have done differently if you could?

I would have loved to have been involved in creating special effects for films and television.

Fine. I’m not as driven these days but it’s compact and solid and ticking over nicely. At one stage I had three shops, a design company and a restaurant and was importing and exporting as well as manufacturing.

How do you market the business?

We have a worldwide reputation, which is great, and we still do promotions from time to time, for example, for the latest Paddington Bear film.

What are the best and worst things about running your own business?

The best is not knowing what tomorrow will bring. The worst is bureaucracy. Being manufacturers, we have always conformed to the highest EU standards of safety etc but the bureaucracy can be overwhelming.

We sell quite a lot online but we love people coming into the shop.

The only business plan I ever had was written on the back of an envelope! I do take a more scientific approach these days but I keep getting new ideas.

Understand the margins and control your overheads.

What three qualities are most important for success?

Humanity — be kind; Respect the people who work for you; Leadership — don’t ask people to do anything you wouldn’t do yourself.

Lunch at your desk or eat out?

Love to lunch out but normally too busy.

Mainly historical novels. I am interested in Roman and Greek culture. I love crosswords and Sudoku.