Let's Get Down to Business - Tom Davies, Brakspear 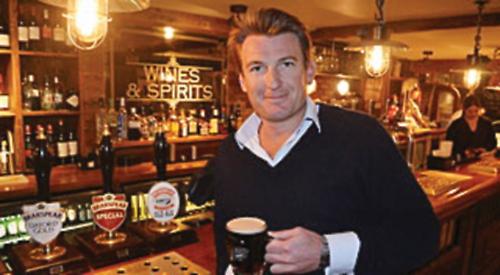 TOM DAVIES is chief executive of Brakspear, the Henley pub operator and brewer. He is the fifth generation of J T Davies, a family owned business, which was founded in 1875 and acquired Brakspear in 2007. He lives in Fulham and enjoys tennis, golf and skiing.

Brakspear is a pub operator, pub landlord and brewer. There are three strands to the business, tenanted pubs, managed pubs and our own beer brands. We have 135 pubs stretching from the Cotswolds to Brighton. Most of them are tenanted but 10 are managed, including the Bull on Bell Street in Henley, where we have a microbrewery. The main brewing business ceased brewing in Henley and moved to Wychwood Brewery in Witney in 2002.

When did the business start?

Brakspear was founded in 1711 by William Henry Brakspear who bought a brewery in Bell Street.

J T Davies & Son was founded in 1875 by John Thomas Davies, who moved to London from Wales and borrowed money to build the Mansfield pub, which is now known as the Gospel Oak. Brakspear was acquired by J T Davies in 2006 and the companies merged. The 50 pubs that were owned by
J T Davies were all rebranded as Brakspear because the brand was so well known.

How many people does Brakspear employ?

Currently we have 325 employees.

What did you do before you joined the business?

After leaving school I went to Edinburgh University where I obtained a business masters degree. After graduating, I worked for Geronimo Inns for two-and-a-half years and them Fullers Brewery for another two-and-a-half. I came into our company as commercial director in 2007 and spent three years observing and getting to understand every aspect of the business. I took over as chief executive in 2010. I wanted to make it a proper family company, making sensible, long-term decisions for the benefit of future generations. My two sisters didn’t want to come into the business but for me it seemed a natural thing to do, although there was never any pressure put on me to do so. I’m happy that I did. I’m very proud to be the fifth generation of my family to run the business and hope one day to hand it on in good condition to the sixth generation.

What or who influenced you?

I’m very close to my father, Mickey Davies, who is now company chairman. He has been an inspiration and has had a great influence on me.

How is the business doing?

We are doing okay. We’ve sold a few pubs, going from 155 to 135 over the past couple of years, and we have bought some fantastic new ones for both our tenanted and managed divisions. Trade isn’t easy but we are lucky to operate in London and the South-East.

We have 130 separate businesses and operators, all with their own ways of marketing themselves. We have a very comprehensive website that showcases our range of beers and every property. Each pub is featured in detail with photographs, descriptions, locations, what’s on offer etc.

What’s the best thing about running your business?

I love pubs and people as well as eating and drinking, so what could be better?

It is a tough business with many challenges, not least from the Government with beer duty, VAT and business rates. The turnover threshold for a viable pub increases every year as costs increase and closing pubs is never popular so a solution needs to be found. Finding staff is the single biggest issue for the operators I speak to.

We aim to grow steadily and remain safe and stable.

How has the business changed?

The biggest change since I took over is that we now operate our own pubs rather than just have tenants and we now have a brewery once again at the back of the Bull. It is nice to be brewing again, even if it is only small quantities.

To recognise my strengths and weaknesses and to compensate for the latter by having some outstandingly talented people around me.

What three qualities do you need for success?

Leadership, honesty and clarity of thought.

How do you dress for work and is it important?

I’m pretty relaxed but I wear what’s appropriate for what I am doing and and who I am meeting.

I’m a phone addict, so my mobile is essential.

With 50 pubs within five miles of my office, it would be very easy to lunch out every day but my doctor might have something to say! I have lunch at my desk for about half of the week.

The last exams I took were my wine exams.

Newspapers, the business press and the occasional book when I’m away.

There’s lots to do before then!