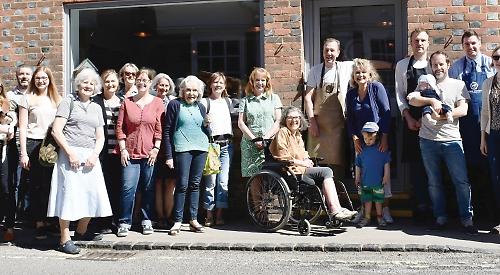 The Granary in High Street has moved its deli into the former Barclays Bank next door, which owner Robin Holmes-Smith bought after the bank closed in March 2016.

Mrs Cusack, who lives in the town with her actor husband Jeremy Irons, cut a ribbon to unveil the new premises, which stocks a range of cheese, beer, bread and charcuterie as well as gift cards.

Mr Holmes-Smith said he was delighted to see it finally open.

He explained: “A couple of years ago, when the bank shut, it came on the market and because it was next door we thought we had better go for it but it has taken us a long time to buy it and get all the work and everything else done.

“We had to put a lot of thought into how it was going to look — simple things like the lights, the flooring, the wall colouring, the layout and everything else.

“Once you separate the deli product out from the café it’s much easier to keep the temperatures regulated and the cheese in better condition. It’s also a much nicer and much calmer space for people to browse and shop.

“People are spending more time in here because we have got an extra offer.

“We have got 56 different beers, which is a new thing for us, and we’re trying to keep that as local as we can. I’m pleased with the look of it and the feedback has been positive and really pleasing.”

Mrs Cusack, who lives in Hill Road, said she visited the deli every day.

She said: “For me Robin is the the sort of centre of Watlington and now he has expanded so he has got the Granary in a fantastic space where we all congregate and have gorgeous food, gorgeous coffees and gorgeous drinks. We’re very lucky to have him.

The deli, which began in 1985, was taken over by Mr Holmes-Smith and his wife Francesca when it was in High Street in 2002.

They moved it to its current premises in 2013 and later added the café.