Yeah man, it was so far out... hippies return for pub music festival 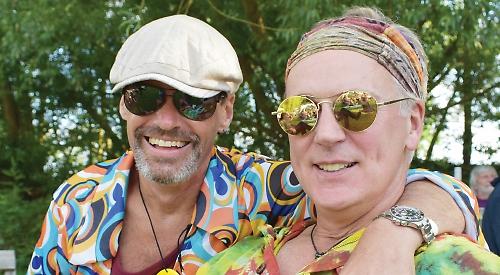 ABOUT 300 people attended a “hippie” music festival in the garden of a pub.

Seven acts performed at Springstock, which took place at the Flowing Spring in Playhatch on Saturday afternoon and evening.

Visitors had travelled from as far as Newcastle and Cornwall and some wore colourful Sixties-style clothes while others donned specially made black and orange T-shirts with “Springstock” across the front.

The pub’s bar and kitchen were moved into marquees in the garden for the event and guests sat on blankets or had brought their own chairs to sit on.

The headliners were Coda, a Led Zeppelin tribute act named after the rock group’s final album.

The other performers included singer King Size Slim, aka Toby Barelli, and singer-songwriter Steve Morano and blues group 3 Buck Shirt, both from Reading. They were followed by Dr Bluegrass and the Illbilly 8, rock group Northsyde and acid jazz quartet Corduroy.

The sell-out event was organised by Flowing Spring landlords Nick Willson and his partner Hazel Lucas, who have run the pub for eight years and bought it from Fuller’s last year.

Mr Willson said: “It was absolutely brilliant from start to finish. We were at capacity by about 6pm and it was really, really buzzing for the last two bands. By that time everyone at the front was getting on their feet.

“People are already asking about us doing it again next year but we’re still recovering from the whole thing!

“Customers had been asking us to put something on. We have done a jazz festival before but this time we put on something that fitted with the demographic of people who come here. There was more rock, blues and particularly a slightly hippy style of music as most people who come here are that kind of age.

“Our customers are passionate about what we do and support us through everything. They are always happy to rally the troops and get friends from far and wide to come along.

“The food and drink is a massive operation and we managed to get it just right. We ran out of beer at 11.15pm and cider shortly afterwards. By that time the last band had finished and the bar was basically dry.”

Next Sunday (June 17), the pub will have its annual dog day where regulars bring along their pets for an afternoon of activities from 3pm. This will be raising money for the Battersea and Old Windsor dogs’ homes.