Free hire of boats to pick up rubbish from the river 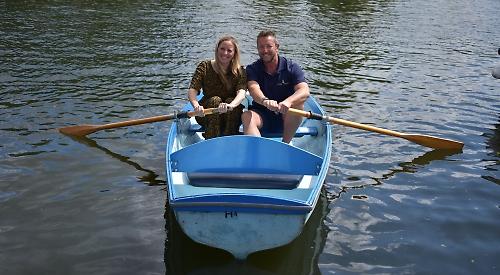 A BOAT hire company in Henley is offering free use of its rowing boats for volunteers to remove rubbish from the River Thames.

Environmental campaigner Julia Carey approached Hobbs of Henley with the idea after she read an article about a firm in Denmark offering the same thing.

Owners Jonathan and Suzy Hobbs agreed that the rubbish collectors could take out one of the boats from 10am to noon Monday to Friday without charge.

Mrs Carey, 40, of Reading Road, Henley, said: “I was inspired by a newspaper article about how in Denmark a boating company is doing exactly this.

“I got in touch with Hobbs to see if they were interested in doing something similar. I didn’t want to put pressure on them as they are asked for favours all the time but then they came back with this really generous offer.”

Mrs Carey, who works as a sustainability consultant, says there is always rubbish to be found in the river, especially during the busy tourist season around the royal regatta and Henley Festival.

She said: “There is quite a lot of rubbish that gets blown into the river, including small pieces of plastic.

“You see cigarette packets and the occasional crisp packet inside a swan’s nest, which is sad.

“Generally it gets worse when Henley is at its busiest, particularly at night when people have had a drink.

“We have to try to keep our stretch of the river as clean as
possible.”

Mrs Carey, who is married to Paul, an entrepreneur, and has three children, says picking up rubbish from the river could be a fun activity for families during the school holidays.

She said: “Overall, people in Henley are quite good at looking after the environment and it is the younger generation who are much better than my generation.

“I think a lot of older children could get into this as something to do.”

Jonathan Hobbs, managing director of Hobbs of Henley, said he was happy to help.

He said: “I think it is very difficult not to notice everyone’s reaction to the war on plastic since the Blue Planet 2 programme was aired and people of all ages are now talking about what can be done to change the way we live.

“When Julia came to us with this idea it felt a good way for us to get involved.

“I gave it some thought about how we could fit it in with our summer schedule and thought a morning row is good for fitness and if it also helps to clear the river of rubbish then that’s great.

“The stretch at Henley is generally not too bad but there are areas, particularly after the regatta, where rubbish does collect in the reeds, which we can point out to people so they know where to collect it.”

In November, Lindsey Coles swam the River Thames from Lechlade in Gloucestershire to Teddington Lock in London while dressed as a mermaid to raise awareness about single-use plastic.

She said Henley was one of the cleanest stretches she had visited.

In April, more than 50 people helped clear rubbish from the river and towpath between Sonning and Shiplake.

The volunteers filled more than 20 bin bags with rubbish, mostly food wrappers, and a large number of glass bottles. They also found a number of discarded hypodermic syringes and some collapsible road signs of the kind used during roadworks.