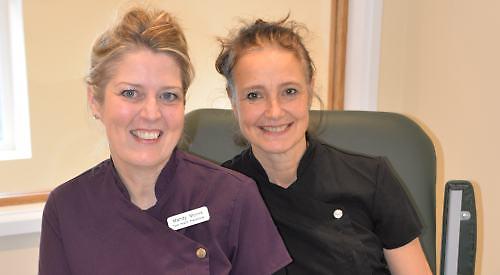 TWO women who run a podiatry clinic in Wargrave are to visit India this month to volunteer at a leprosy colony.

Alison Clark-Morris and Mandy Morris, who launched Feetwise Footcare in High Street in October, will spend two weeks at the Village of Hope in East Delhi.

It was during their last visit to the colony in April that they came up with the idea for their business, which is based at the Wargrave Dental Clinic building.

This time they will treat and bandage patients and will also trial new peg-assisted insoles before writing a report on the results.

Started in 1993 by the Hope Foundation, the village is a community of 4,000 people. Every family has at least one person who has leprosy and treatment is provided free of charge.

Mrs Clark-Morris, who lives in Bradfield with her husband Lloyd, is a podiatrist with more than 30 years’ experience and has volunteered at the village for the last three years.

She said: “It is actually like a little haven. Even though there are people living in poverty, it is a positive place and they all look after each other.

“It is so full of life. There is lots of noise and there is always some sort of festival happening.

“This year, we are thinking about funding an interpreter because sometimes the message can get lost. It is important they understand the benefit of the treatment you are giving them so that when you leave they can do things to look after themselves. We also need feedback from them.

“There are services out there that they can access and they choose not to. We want to understand why.”

Mrs Clark-Morris will fly from Heathrow on February 16, accompanied by her friend Lisa Farndon and her son Charlie, who are from Sheffield. She said: “The first time I went out it was just a box-ticking exercise because it had been on my bucket list to work with people who had leprosy since I first started training.

“But I realised how many small things we can do to improve their lives. There are some patients that I have seen every year. There is a little old lady who I always have a big hug with.”

Miss Morris, 49, who lives in Wallingford, is a foot health practitioner who works as a nurse at the dental clinic two days a weeks as well as the podiatry clinic.

She will fly to India a week later with her partner Michael Palfrey. Last year was her first visit to the colony and she sponsored orphans to ensure they received an education.

Miss Morris said: “I’m really excited to get back out there. There are lots of little things I know I can do to improve this year.

“They are always excited about the prospect of someone coming to treat them. I think they are quite fearful but if we can build up trust with them they will listen.

“Michael is coming with me this time to help out. He will spend time with the students and teach them. He will probably want to start a cricket team.”

Between October and December, the women raised £3,797, which will be used to purchase blankets for the winter and tricycles to help the villagers get around without putting pressure on their feet.

Most of this came from giving talks to Rotary clubs and WI groups but they also held a pamper day and received donations from customers.

Mrs Clark-Morris would like to see other podiatrists volunteer at the colony.

She said: “We feel like we start making progress and then we have to leave. When you go back the following year you find that nothing has progressed when it comes to education.”

Leprosy is a chronic infectious disease caused by the spread of bacteria. If it goes untreated, suffers may have to have limbs amputated.