Homeless put in hotel for safety 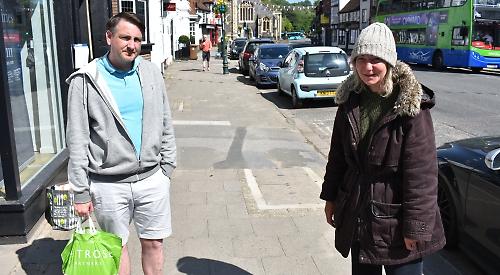 AN historic hotel in Henley is being used to house homeless people during the coronavirus pandemic.

The Red Lion, on the corner of Hart Street and Thames Side, is housing 12 individuals at the request of South Oxfordshire District Council to safeguard vulnerable people from covid-19.

The hotel closed in March along with other “non-essential” businesses and was asked to accept its new “guests” after the lockdown was announced by the Government.

The council says it has “robust” procedures in place to ensure the welfare of those placed into temporary accommodation and to minimize, where possible, the impact on other people.

However, Henley’s representatives on the council have received a number of complaints about the behaviour of some of the hotel’s occupants and the police have been called on numerous occasions.

The Red Lion, which dates back to 1632, has 39 en-suite bedrooms and would normally be preparing for Henley Royal Regatta, when it is fully booked.

None of Henley’s three district councillors — Mayor Ken Arlett, Stefan Gawrysiak and Kellie Hinton — were told about the move by the council.

Councillor Arlett said: “We should have been informed of what was going on.

“We don’t know where these people have come from. I’ve asked if they are on the district council’s waiting list for homes or are they off the street and I’m yet to receive an answer.

“I’m told the police have been called and arrests made and that an ambulance has been there and taken someone away.”

Councillor Hinton said the hotel residents were from South Oxfordshire and the Vale of White Horse districts.

She said: “Obviously, every district council had to house every homeless person. It was a massive task. It is great that the company that runs the hotel was willing to work with the district council to achieve that goal.

“It’s great that every person that was on the streets is now in accommodation.”

Cllr Hinton said she had been contacted by four residents concerned about what was happening at the hotel.

“I completely recognise the inconvenience to some people this has caused in terms of some of the things that have gone on,” she said.

“Primarily, I’ve heard about groups congregating together outside, particularly in that area in front of the hotel and on Red Lion Lawn and not practising social distancing at all.

“I’ve heard there has been some illegal activity.

“All I can do is remind people that the police are the only people with real power to enforce the rules. If they see something they believe is wrong, they should call 101.” She said the councillors were being “kept in the loop” by council officers.

Cllr Hinton added: “I completely understand where Ken’s coming from but we have all had to react very quickly to things and you can’t remember every time to remind every single person. Sometimes there isn’t that time and there are other priorities.

“I’m just amazed by how hard district council staff and officers are working to resolve situations across the district.”

Rev Jeremy Tayler, the rector of Henley with Remenham, who lives opposite the hotel, said: “I’m completely supportive of the principle of using hotels to house homeless people and I’ve got no problems whatsoever with living next door to people in that position.

“I am a little concerned about the issue of transparency and how difficult it has been to get information about what’s going on there.

“I think it would have been better, with hindsight, to have worked with the local community to get people on side rather than having this situation unfolding in an unhelpful way.

“Hopefully they will be able to build some longer-term solution to the problem of homelessness and I’d be thrilled if that happens.

“The last thing I want to do is scotch what is a really good thing to come out of this.”

Liz Hayden, the council’s head of service, housing and environment, responded to a complainant saying that the police did not consider the situation to be “inappropriate”.

She wrote: “In order to mitigate the risks that this strategy presents, we have kept the police fully informed and agreed an intelligence-sharing process and method for seeking support should the need arise.

“In addition, we are providing floating support and relevant agencies continue to engage with residents as necessary. To be clear, the support workers visit the hotel daily as needed, none of them resides at the hotel.

“The housing needs team are working hard to find all residents long-term accommodation and we are working closely with registered providers to facilitate this.

“We have reminded all residents that they must adhere to social distancing rules and the hotel has put signs up in communal areas and distributed reminder letters to re-enforce this message.

“We are aware of two residents who made a call for welfare and needed medical support and therefore on these two occasions you may have seen an ambulance outside the hotel. If we receive reports from either the police or hotel relating to our residents, we will take necessary action.”

A council spokesman said: “We have placed a small number of residents into temporary accommodation at the Red Lion.

“Our primary responsibility is to help to safeguard vulnerable individuals from covid-19 and to provide them with the necessary
support.

“We’ve provided this arrangement in line with a directive from Ministry of Housing Communities and Local Government to safeguard vulnerable people.

“We have robust procedures in place to ensure the welfare of those placed into temporary accommodation and to ensure, where possible, that this doesn’t impact others.

“We have kept the police fully informed of the arrangements and are working with other agencies to help the residents find suitable longer-term accommodation.”

People living at the hotel said they felt safer and had access to running water, a bed and bathroom.

Noel Drummey, 41, was previously living in his car in the Abingdon area for five weeks after splitting up with his partner.

He said: “I’ve got two kids so I didn’t want to go too far away from them. The only family I’ve got is my sister in Ireland.

“The hotel staff have been fantastic and very accommodating. Having a shower or bath, being able to change clothes not in a car — it makes you feel normal again.

“Don’t get me wrong, there are people in there that have abused the position they have been given. When we were first there we had a lot of issues with alcohol and people being loud and using it to party.”

The temporary residents have an evening meal at the hotel and receive a £20 food voucher from Nomad as well as food.

Mr Drummey said: “When I get back on my feet I’ll do everything I can to help them and thank them.”

Ellie Nixon, 49, is a former teacher and advertising copywriter who has been homeless for about two years.

Last year she suffered a brain injury after hitting her nose on a kerbstone while avoiding a bus in Ealing. She spent two months in hospital and couldn’t work.

She said: “I’ve got very lucky because I could have been on night buses and been open to all sorts of shenanigans.

“I’m in a big comfy bed and I have an en-suite. I can lock my door and I can keep myself clean. I have been gifted food and I’m very happy about it.”

Jeremy North, 67, has been at the hotel since being discharged from the John Radcliffe Hospital in Oxford.

He said: “I was living under a bridge near Botley and I had a gall stone and was extremely uncomfortable.”

He was seen by staff from the Gatehouse in Oxford, which supports adults  who are homeless, vulnerably housed, on low income and/or looking for company and community.

Sam Gill, who owns the hotel, did not respond to requests for comment.