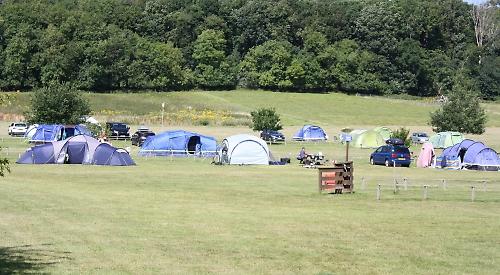 STAFF at the Swiss Farm touring and camping site in Henley are happy to see the return of visitors.

The 38-acre site off Marlow Road re-opened at the start of July, when the Government eased the coronavirus lockdown restrictions, having been closed since March.

Holidaymakers are now returning as more people look to take their summer break in the UK rather than abroad because of the threat of the disease.

About 400 people visited at the weekend, bringing 130 caravans or motorhomes as well as about 15 tents. The visitors checked in online to prevent unnecessary contact with staff.

The site’s café, toilets, showers, laundry and playground are all open but only four to six people are allowed in the buildings at once. The swimming pool remains closed.

There is an online ordering system for the café so campers can collect their food without having to queue.

Normally, the site can accommodate about 700 people, 135 caravans or motorhomes and 65 tents. Owner Joseph Borlase said he had limited the number of visitors to keep them safe and ensure social distancing was being followed.

He said: “We were slightly worried about re-opening because we didn’t know how nervous people would be but it is nice actually. Everyone is behaving and there’s just a nice, calm feeling.

“Everyone is pleased to be outside and it’s nice to be in the countryside because there’s access to public footpaths and dog and river walks and we’ve seen people going off with their paddleboards.

“We’ve got a team working around the clock and every few hours they close a block while it’s cleaned. We have anti-viral fogging machines and they completely sanitise the rooms.

“It’s pretty relentless work for them but we’ve had really good feedback and our TripAdvisor feedback has also been great.

“It’s more rewarding having people back because you can actually see the results of your work. Now we’re open again we can see people being happy here. I think some of the staff found it very difficult with the lockdown, especially the front-of-house team who are very much people people. That’s why they work in this kind of industry.”

Mr Borlase, who will mark 75 years of the business in 2021, praised the Government for its business support schemes, such as the VAT “holiday” and the staff furlough scheme, which allowed him to lay off 15 staff temporarily.

He said: “It has been really positive and the Government has been doing its best. The intention to help is there, I think, and we would not have been able to manage without that.

“At the beginning we didn’t know how long the lockdown was going to go on for. We had no grants but the furlough scheme was very helpful.

“We still had to operate because of all the maintenance and things like admin so we had to keep a core team of people.

“It was pretty soul destroying being closed with the beautiful spring we had and everything was set for it to be an absolutely bumper year.”

Mr Borlase is looking to extend the season so the site is open during the winter, including over Christmas.

He said: “We’re already getting strong demand for Christmas and other bookings in November and December whereas last year we closed mid-December and opened mid-February.

“We’re at the capacity we’ve set pretty much every day now until the end of August. September is filling up fast as well.

“The ambition for us is making sure that we come out of this with happy customers, our business reputation intact and ensuring we’re not part of the problem.

“When we re-opened I was a bit worried but everyone has been very respectful and our guests are individual families spending quality time together.

“We have tried to keep things calm and comfortable for everybody.”