Let's Get Down to Business: Rose Grimond, Nettlebed Creamery 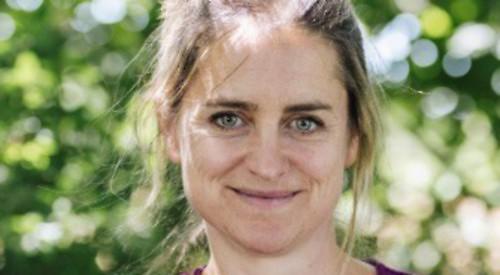 ROSE GRIMOND is the founder of the award-winning Nettlebed Creamery, which produces artisan cheeses and other organic dairy products. Born and educated in London, she spent time as a child on her uncle’s farm in Nettlebed. She read English at Oxford, then studied drama in New York followed by five years touring as an actress. She lives in Nettlebed with her husband James Scudamore, an author, and their three children and many animals.

It depends on the time of year and Christmas is the busiest time of the cheese calendar. It’s generally 13 to 20, some part-time and some self-employed.

I pursued an acting career for about five years. I also worked at the Economist for a while and for Frances Cairncross, then High Sheriff of Greater London. But although I loved acting, it didn’t love me back and I was becoming increasingly obsessed with food.

I had a connection with the Orkney Islands through my paternal grandfather, Jo Grimond, who was MP for Orkney and Shetland and for many years leader of the Liberal Party. I had always been struck by how incredible the produce from the islands was and how great it would be to introduce it to consumers in England. So in 2007 I founded a business called Orkney Rose, which sold fresh Orcadian produce to some outstanding restaurants as well as directly to consumers at a stall at London’s Borough Market. My husband James is a writer so could work anywhere and when I became pregnant with our first child we moved to the farm where we are now.

I was too stupid not to.

Nobody — I saw the opportunity to contribute to the ever-increasing selection of great British produce.

Not one particular person but lots of lovely people have helped me with advice.

I would have got the plumbing right on day one and not have had concrete delivered on a dry, windy day (a costly lesson).

We haven’t lost a day’s work but we lost 25 per cent of our revenue as restaurants closed. We had to furlough some employees as a result.

The product should sell itself. You can’t pretend a cheese is good if it isn’t. Also people here set the tone and we think that carries through our communication, including online.

Being able to make decisions. For example, we introduced a milk round during the first lockdown. We also have a great relationship with HMP Huntercombe and offer placements as part of an offender rehabilitation programme.

There are always going to be problems so it’s important to be at ease with knowing they’re round the corner.

Early next year we hope to open the Cheese Shed, a converted shipping container next to the creamery from which we will sell toasties and kefir smoothies. It is a development of the relationship we have fostered with local consumers over 2020. We have also developed some very good relationships with owners such as Barrie Wagner at Machins the butchers, Tamsin Borlase at the Bosley Patch and Emma and Jed at Blue Tin. The pandemic created a momentum with more footfall which we hope will continue. We are seeing a renaissance in great food producers in and around the Henley area and we are very excited to be part of it.

That business is all about people. Customers and staff.

Know that your commitment will be tested. It’s unlikely that things will go the way you expected. Try to choose the right person at the right time for advice.

I was devastated when Frances Cairncross said that I was exceptionally organised as that’s not what I, as an aspiring actress, wanted to hear. These days it’s a skill that makes life more relaxing and certainly easier.

To have a quest, to be curious and to be kind.

It ranges from wearing wellies to wearing a suit. If on a production or packing shift then cheese wellies, work- wear and a green hairnet are de rigueur (no false nails, no false eyelashes, no jewellery).

Coffee and at least an hour outdoors.

Not formally but cheesemaking is a science and I’m always trying to learn more.

My husband’s novels, lots of articles and to my children every night.