Let's Get Down to Business: David Reynolds 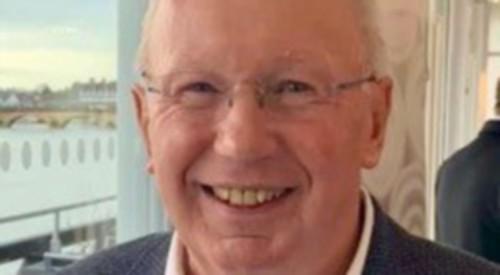 DAVID REYNOLDS writes the Let’s Get Down to Business column, which appears in the Henley Standard fortnightly. To mark his 100th column, we turned the tables on David and asked him some questions. Born and raised in Kent, he left school at 16. He went into insurance and rose to become chief executive of Combined Insurance in the UK from 1980 until 1999. He then worked as a consultant and also spent four years at AIG before retiring in 2008. He has written two business advice books. David and his wife Sue lived in Henley for many years before moving to Wargrave in 2007 but are now planning to return. The couple have four children living around the world and seven grandchildren.

Why did you start this column?

I had written two business advice books and was thinking of writing a third, this time aimed at small business owners. Having spent most of my career in the corporate world, with the financial backing of a big company, this was an area I was less sure of so I planned to interview some local small business owners. The Henley Standard agreed to publish edited versions of these interviews and here I am four years later still at it (and the book is still work in progress!) My first interviewee was Niki Schäfer, owner of NS Interiors, who chairs the Henley Business Partnership.

How have your interviewees found the process?

The vast majority told me they really enjoyed it — after all, most people love talking about themselves! Only three people have declined to be interviewed. The questions have been fairly consistent over the years, although I have added one about the impact of the coronavirus pandemic on people’s businesses.

Can you tell us about your two books?

Discover The Power Secrets of the Rich and Successful was my first book and was an accumulation of business knowledge and advice that I’d gathered during my career. I was very fortunate to have been influenced and mentored by some great people early on. My second book, Why Wasn’t I Taught This At School?, was similar but aimed at a younger audience. Writing came quite naturally to me and I had a store of notes I had written over many years for training purposes.

How did you come to work in insurance?

I left school at 16 as I wanted to earn money straight away and no one in the family had been to university. My father was a lorry driver and my mother worked part-time in a grocer’s. My mother was my inspiration as she was always optimistic and encouraged me. My first job was in a laboratory but I was soon bored so started selling vacuum cleaners door-to-door. That was the best possible education and I think of it as my “degree” course. I then worked in a department store for five years selling furniture. Eventually, I was running two departments but wanted to earn more than the store was prepared to pay me, so I became a commission-only insurance salesman with Combined.

How did you rise to the top of the company?

Combined was an American insurance company that had only just opened a branch in the UK, so I was fortunate to join them in the early growth stage. Through a bit of hard work and being reasonably successful at selling and managing sales teams, I worked my way up though the ranks to become chief executive in 1980. We grew the company and formed a life insurance company in 1987 to add to our healthcare insurance division. I surrounded myself with quality people and encouraged them to grow and develop themselves as well as the business. I find that recruitment is an intuitive process but I look for honesty, loyalty and enthusiasm. I am also a great believer in training. Networking with other leaders in the industry, who were always generous with their time and support, taught me a lot. People like Mike Wilson, of Allied Dunbar, who founded St James’s Place, were a great help. One of my best decisions was to appoint Perpetual, a Henley company, as fund managers for our investments.

Learn as much as you can from a similar business first. Then be brave and dive in. Surround yourself with quality people and don’t be scared of those who may be better at some things than you. Be prepared for things to change dramatically or to go wrong. Have strong self-discipline.

A positive attitude, enthusiasm and a pleasing personality. A good sense of humour is valuable, too.

What the biggest mistake that you’ve made?

I have no real regrets from my business life. Any mistakes were only small and resulted from having a go.

What do you do in retirement?

Our children are in Singapore, Germany, America and here in the UK, so we love to visit them and have holidays nearby as well. We have a timeshare in Phuket as we love Thailand and south-east Asia. I started networking locally to promote my first book and in 2008 realised that many small businesses were struggling due to the financial crisis, so I offered my advice to quite a few over a cup of coffee. I really enjoy helping small business owners become successful or turn around their business. I respect anyone with the guts and determination to run their own business. I still do that and, of course, I write this column.

Two newspapers a day and both fiction and non-fiction. My favourites are autobiographies of sports people and business leaders, such as Sir Alex Ferguson and Lord Sugar.