Let's Get Down to Business: Jayne Worrall, the Bull Hotel 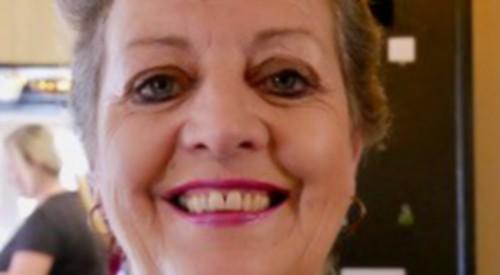 JAYNE WORRALL is the licensee of the Bull Hotel, a 15th century former coaching Inn in Wargrave high street. Although born in Chiswick, she has spent most of her life in Berkshire. A dog lover, she walks a close friend’s whippets, Willow and Olive, every day.

The Bull is a village pub with a restaurant and four letting bedrooms. It has a lot of original features and a charming and friendly atmosphere.

As well as me, we have a full-time chef and two other full-time staff and six and or seven part-timers.

After school I went to college for a year to get my secretarial diploma. I then went to live in Jersey, where we had relatives, for a couple of years working for a car hire firm. My father was an airline pilot and I loved flying so as soon as I was old enough I joined BOAC (predecessor of British Airways) as a stewardess. I really enjoyed this and stayed there for eight years. My partner at the time was a rep for the Courage brewery and wanted to run a pub. He talked me into it and we took on the Bull on January 8, 1980 and were there for four years before moving to the Rising Sun in Witheridge Hill. However, we split up three years later and I went to work for an IT company in Burnham. I eventually became their in-house trainer for different software packages and remained in the industry for some years. In 1998, I was living in Wargrave when the Bull came on the market so I applied to Brakspear to take it over for a second time. However, the rent became too much so I left and bought a free house in Devon. Sadly, that didn’t work out, so when the Bull became available again on much fairer terms I moved back.

When did you start?

To be back where I felt I belonged and to carry on where I had left off.

My former partner persuaded me.

My parents had a huge influence on me and I’d be a happy lady if I was even half as nice as they both were.

I have got no major regrets but, looking back, I would leave out the Devon part of my life — unhappy days.

A lot! We were forced to close for three months from March to July last year and then again in November. We re-opened in December only to have to shut again soon afterwards until May 17 this year. Last summer the Eat Out to Help Out scheme was helpful and we were very busy. In fact, when that came to an end I continued my own version for another two months. During the last lockdown we started a takeaway service which helped me keep my head above water.

We were doing okay until the pandemic.

I use the Bull’s Facebook page and other social media and a number of articles in the Henley Standard have helped. Online travel agents promote the bed and breakfast side of the business.

I like being in charge of my own destiny, which I have been for most of my life. If it all goes pear-shaped, there’s only me to blame.

Being tied to the business; it’s not a job, it’s a way of life. I can’t just take off for a few days. The last time I had a holiday was when I won an award for being pub of the year in 2003. The prize was five days in Athens but I swapped it for Cornwall and took my mum with me.

My immediate goal is to get it back to where it was before the pandemic.

I’d like to retire at some point but I don’t know when yet. However, I am looking forward to being able to do what I want to do in my own time and start working my way through my bucket list.

To look after people as you would like to be looked after.

Do your homework. Determine what your market is and know how to attract it. Ask yourself, “Do I really want to do this?”

Understanding your business and your customers and being patient with people (at least most of the time!)

Looking after my staff and customers and showing them respect. And being prepared to roll up my sleeves and work hard.

Smart casual. As long as I have my “war paint” on and my hair is right, then I am set for the day.

What can’t you do without every day?

Walking the whippets — and breath!

I like biographies and autobiographies and historical novels. I love classic cars, so am always looking for good books about them. I am lucky to have a Jaguar XJS V12, which is almost 35 years old.

Having travelled to so many parts of the world as a stewardess, I want to see more of England. I’d like to find somebody to ghost write a book for me as I have so many funny and interesting stories from working. Whenever I retire or pop my clogs, I’ve had a ball.