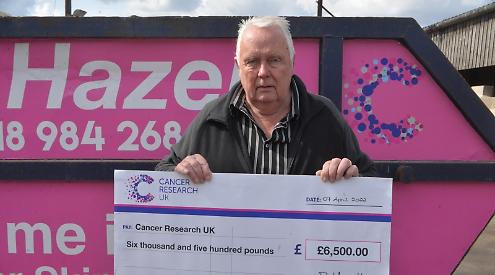 A WASTE and recycling company has raised £6,500 from a charity fundraiser despite having to abandon it early.

Hazell & Jefferies, which is based in Whitchurch Hill, donated £5 from each skip it hired out during March to Cancer Research UK.

The company had placed 11 specially painted pink skips on roadside verges around South Oxfordshire, including Nuffield, Ewelme and Rotherfield Greys, to help promote the initiative.

But it was criticised by Freddie van Mierlo, who represents Watlington on Oxfordshire County Council, after he was contacted by parish councils unhappy at the sight of the skips.

He wrote to Hazell & Jefferies, complaining that the skips “predominantly” advertised the company’s services and had encouraged fly-tipping.

Councillor van Mierlo said: “I would like to request that you immediately collect these skips and donate an appropriate sum directly to the charity they claim to support.”

Chris Stanley, general manager of Hazell & Jefferies, said he could not understand the opposition.

He said: “I can’t think of anyone of an adult age who has not been affected by cancer, either directly or indirectly. Even if you don’t like having a skip at the end of your road, I am so surprised someone would want to complain about it when it’s there to raise money.

“We are being made to feel that we have done something evil but it was to be a nice story as far as we could see.” Following the complaint, the company chose to retrieve the skips but continued to collect money and exceeded its initial target of £5,000.

Company owner Richard Hazell said: “We are delighted to say that we have raised a total of £6,500 for Cancer Research UK following our pink skips campaign throughout March.

“Even though the skips were removed early we kept the campaign going and received lots of support from our customers.