THE owner of a Henley off-licence says he has lost more than half his trade since roadworks started near his shop.

Karan Takhar says footfall at Takhar Wine Mart in Greys Road has dropped by about 60 per cent in the past five weeks.

Southern Gas Networks is replacing the gas mains and services beneath the street as they have reached the end of their useful life.

It says the metal pipes must be replaced with plastic ones to ensure they do not leak and that the new pipes will last at least 80 years.

On March 3, contractors closed a 50m stretch of road a few feet east of Mr Takhars shop and began digging it up. They set up temporary traffic lights to either side of the premises.

There are two parking places outside the shop but Mr Takhar said customers were afraid of obstructing traffic while pulling in and out.

He said: “Ive noticed a big drop in trade for as long as those works have been going on. The pavement is clear but people who normally come by car have told me theyre scared of parking here in case they block the road.

I took this shop over from my father six years ago and Ive never seen it this empty. Its really making things difficult for us.

I know the work has to be done but I wish they would hurry up and finish it.

No one has said anything to us about how long its meant to go on for or when its going to end.”

When the work began, Southern Gas Networks said it could last up to 12 weeks.

Southern Gas Networks said two letters were sent to every household and business in Greys Road before the work started.

A spokeswoman said the work was running ahead of schedule and the road should re-open by Thursday.

She said: “Wed like to reassure the local community and road users that weve been doing everything we can to minimise disruption, including working at weekends where appropriate, to complete this essential work as quickly as possible.

We would like to thank everyone for their ongoing patience while we carry out these essential works.”

The company will be returning to carry out further replacement works in Greys Road and Queen Street in the autumn. It has promised to give advance notice when a date is confirmed. 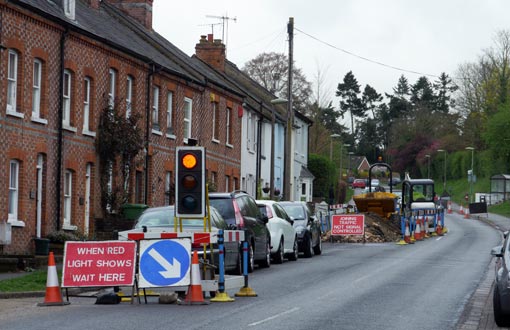