TRADERS in a Henley street say their customers are still having trouble accessing the parking bays outside their shops.

They say the three spaces in front of their shops in Reading Road are used by people who park there for a day or more.

The Henley Standard reported on the problem a year ago but the shopkeepers say nothing has changed since then.

Recently, a green Jeep was parked in one of the bays for four days and a note was left on its windscreen urging the driver to be more considerate.

This car has been parked here all day Saturday, Tuesday, Wednesday and now today. Please, please could you think about not parking here all day. Many thanks.”

The traders denied any of them wrote the note but said they were losing trade because their customers couldnt park outside the shops.

Molly Grimes and Amy Bryant, who opened florist Bluebells of Henley at the former home of Henley Records last year, want waiting times to be introduced at the bays.

Mrs Bryant said: “Many of our customers say its difficult to stop here because there are so many cars and theyre often parked all day.

This end of town is made up of independent businesses, which is what Henley is all about, but this isnt helping us. It would make more sense if the parking was limited to 20 minutes or so.

The shops along here are the kind where customers want to quickly drop something off or collect something.”

Mrs Grimes said: “We have spoken to people weve seen parking there all day. Some have been very rude but some have said they didnt realise it was causing us inconvenience and agreed to park elsewhere.”

“Nothing has changed - the situation is the same as before,” he said. “The last time we chased it up with the council they said it was on their to do list but they didnt have the budget. You cant spend all your time chasing it up when youve got a business to run. You get fed up. All thats really needed is a 20- or 30-minute waiting time.

Aspen Weatherburn, who owns the Naughty Mutt Nice dog grooming salon, said: “People are being a bit more courteous but its still a problem and always will be as long as there are no restrictions.

Small, independent businesses need as much support as they can get. Shops in this area are service-based so its important to have somewhere for customers to stop for a short period.

For me, a 20-minute turnaround would be amazing but nothing has happened. We wrote to the county council a long time ago but nothing came of it. Everyone we spoke to said it was someone elses responsibility.”

David Nimmo Smith, Henleys county councillor, said he had raised the issue with highways officers, who had agreed to consider the issue when redesigning parking spaces in Northfield End and Bell Street later this year. 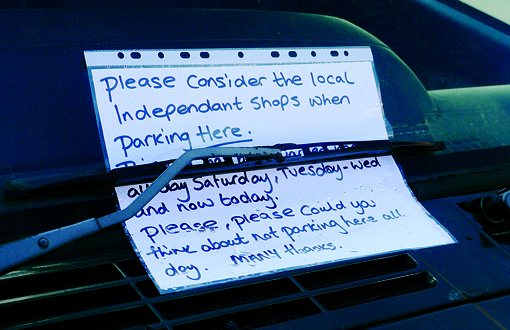